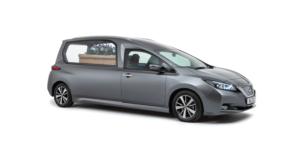 British coachbuilder Wilcox Limousines has converted the Nissan Leaf into a hearse. The conversion is based on the 62 kWh battery Leaf and costs £109,950. In July, the company delivered the first Leaf hearse to London-based funeral director Leverton & Sons.

Twelve more of the electric hearse conversions will go to other undertakers over the next four months. Louis Wilcox, grandson of company founder William Wilcox, said the new model had been well received by the country’s major funeral companies who, he said, want a greener alternative for environmentally conscious customers. “The Leaf hearse is ideal for the increasing number of people who are asking for a simpler and greener burial or cremation for their loved ones.”

The Leaf hearse is only 3% heavier than the standard Leaf hatchback thanks, in large part, to the removal of the original car’s two rear doors and rear seat, despite these modifications and being taller and longer than the original vehicle.