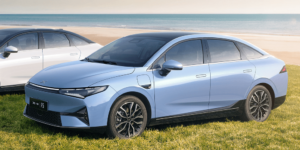 The Chinese electric car manufacturer Xpeng has just presented its financial data for the second quarter of 2022. Compared to the same period last year, sales and revenue almost doubled while losses also increased.

In terms of deliveries, it is clear that the large P7 e-sedan has steadily declined over the past three quarters from 21,342 units in Q4 2021 to 15,983 now. Conversely, the smaller but more technologically advanced P5 sedan has increased, from 7,621 deliveries in Q4 to now 12,848 vehicles. As sales have just remained more or less constant from Q1 2022 to Q2, Xpeng seems to be able to get good prices for the P5. The company no longer shows registrations of the G3i separately, but there were 5,591 units in Q2.

The fact that deliveries in Q2 were on a par with Q1 (there were only 139 fewer vehicles) must also be seen against the backdrop of the renewed Corona lockdowns in China and the associated delivery difficulties. Company founder and CEO He Xiaopeng also sees the company achieving “robust growth momentum” as Corona restrictions are lifted.

The physical distribution network has also continued to grow. As of 30 June 2022, at the end of the quarter, Xpeng operated 388 shops in 142 cities. Its own charging network grew to 977 stations, including 793 fast chargers and 184 destination chargers.

For the foreseeable future, Xpeng is likely to remain in the red as the company continues to invest in new models and developments. In September, for example, Xpeng is set to launch the G9 large e-SUV designed for global markets. “We are accelerating the pace of new product launches to round out our line-up with vehicles priced between 150,000 yuan and 500,000 yuan,” says Xiaopeng. “In 2023, we plan to introduce two new competitive models that will further drive rapid sales growth.” That’s a range of the equivalent of 21,965 euros and 73,220 euros.

In a conference call for analysts, the company also said it was developing two new platforms for at least six models. Among them will probably be the two series mentioned by He Xiaopeng. A new model in the B segment is planned for the first half of 2023, after which a C-segment model is to follow in the second half of 2023. That said, the information on the B and C segments does not correspond to the usual division in Europe, where the new model in the B segment is not supposed to be a small car but a competitor model to the Tesla Model Y.