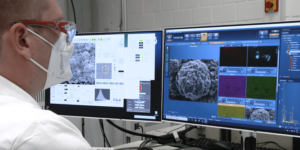 The Volkswagen Group is investing around two billion euros in the transformation of its Salzgitter site in Germany – from the lead engine plant to the lead cell plant. At the same time, the carmaking giant says it has launched a major qualification offensive.

Over the next few years, employees from the engine plant are to be given further training for the required new tasks in cell production. The Gigafabrik Salzgitter is to employ around 2,500 people in future.

The production of battery cells in Salzgitter is to be primarily staffed with existing employees from the engine production. So far, Volkswagen says that around 500 employees have already been introduced into new fields of work. These employees are engaged in the production of tech components for electric vehicles such as rotor/stator and the pilot plant for recycling, but increasingly also in the area of cell production. According to VW, more than half of the existing operational tasks at the site have now been transitioned into tasks relevant to the upcoming cell factory.

As part of the qualification programme, the site is also realigning its training and study programmes in cooperation with the Volkswagen Academy. From September 2022 onwards, Salzgitter will offer the new training occupation of a chemical laboratory technician, which is designed to prepare trainees for work in chemical laboratories. The dual courses of study in chemistry and chemical engineering are also new. By the time battery production starts in 2025, some 80 internally trained chemical experts should already be on board. In future, more than 80 per cent of the training opportunities are to come from the specialisation fields of electrical/IT/chemical.

In addition, Volkswagen wants to expand its employees’ existing expertise with further competencies relevant to the start-up of a cell factory in cooperation with external partners. At the same time, preparations are to be made for setting up the infrastructure for the upcoming wave of qualifications. The newly built chemistry laboratory is to be put into operation in 2023. VW plans to increase the number of training places in chemistry annually from the current six to twelve.

From 2025 onwards, the factory will produce the Volkswagen unit cell for volume models for the new ‘PowerCo’ business unit. The foundation stone for the new Salzgitter gigafactory was laid in July. The factory, which is to produce the VW unit cell on a large scale on an area of 30 football pitches, is only one part of the future battery location Salzgitter. The plant, which was originally opened in 1970, will soon be home to the VW Group’s Global Battery Hub. This means that the group will develop, test, manufacture and recycle batteries at the component plant. In addition, a battery academy and a supplier park will be located in Salzgitter. The plant will develop the unit cell centrally for the group and then deliver it to its other production sites around the world – in the first step to the five other battery factories to be built in Europe. In total, the business unit PowerCo (with partners) will invest 20 billion euros by 2030.