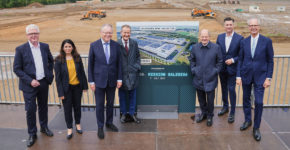 Volkswagen has laid the foundation stone for its first own battery factory at its components plant in Salzgitter. From 2025, the factory will produce the Volkswagen unit cell for volume models for the new ‘PowerCo’ business unit.

Chancellor Olaf Scholz and Lower Saxony’s Minister-President Stephan Weil also came to Salzgitter for the symbolic laying of the foundation stone – alongside. VW celebrities in the person of Chairman of the Board Herbert Diess, Supervisory Board Chairman Hans-Dieter Pötsch, Chief Technology Officer Thomas Schmall and the CEO of the new company PowerCo, Frank Blome. The headquarters of PowerCo – the SE in which external investors will also be able to participate – will be located directly next to the battery factory in Salzgitter.

“In hardly any other industry is the change as fundamental as in the automotive industry,” says Scholz in his speech. “This is particularly visible in Salzgitter; today half of all VW engines come from here. The change will turn out well if we don’t dwell on the old, but grab the new by the horns.”

“Here in Salzgitter it is obvious how much our industry is changing – and how much Volkswagen can be a driver of this change,” added Diess during his appearance in Hall 3. “Salzgiga will be our power centre. From here we start and control our global battery production- with the PowerCo. The battery will be the big value driver in the car, next to the software – that’s why we’re not letting it out of our hands.”

The factory, which is to manufacture the VW unit cell on a large scale from 2025 onwards on an area the size of 30 football pitches, is only one part of the future Salzgitter battery site. The plant, which was opened in 1970, will be home to the VW Group’s “Global Battery Hub”. This means that the group will develop, test, manufacture and also recycle batteries at the component plant. In addition, a battery academy and a supplier park will be located in Salzgitter. Salzgitter will develop the unit cell centrally for the group and then bring it to the world – in the first step to the five other battery factories to be built in Europe. In total, PowerCo (with partners) will invest 20 billion euros by 2030.

“It’s not just a foundation stone, but a milestone,” says Schmall, Chief Technology Officer. Because the cell factory in Lower Saxony will serve as a blueprint for the other locations – the factory in Sagunt near Valencia is scheduled to go into operation as early as 2026, one year after Salzgitter – followed by another 40 GWh factory every year until the end of the decade. After the expansion in Europe, PowerCo is planning further battery factories on other continents. Diess specifically mentions the USA, which had already been rumoured. However, the VW CEO did not name a location.

The standardised factory – i.e. buildings, production facilities and infrastructure such as IT and logistics – is supposed to make rapid scaling possible in the first place. It is supposed to take 18 months from the approval of a factory by the board to the start of production – instead of 36, as PowerCo CEO Frank Blome states.

Salzgitter as a blueprint for the world

The fact that PowerCo is able to build battery factories according to the ever-present Salzgitter model is due to the much-cited unit cell. This is a prismatic battery cell that is to be used in 80 per cent of the VW Group’s e-vehicles in future. Regardless of whether it is a small car, a premium saloon or an e-transporter for tradesmen: the external dimensions of the battery cells are the same in all vehicles.

“We then adjust the different vehicles via the cell chemistry,” explains Blome. “We can take out complexity compared to other cell manufacturers. That applies to cell chemistry, cell formats and also cell factories.”

In other words, both NMC and LFP cells can be used in the prismatic cell housing. The production of the different cell chemistries is even necessary on one belt. VW expects great advantages from this mixture of flexibility and standardisation. For example, the production lines are the same in all factories, so the electrode materials are always cut into the same pieces and assembled into the same stacks before they go into the housing – whether in Salzgitter, Sweden or Spain. This allows VW to order the plants in one go. In Salzgitter, the first plants are to be installed as early as the second quarter of 2023.

The flexibility between NMC and LFP cathodes, but also different material mixtures within the NMC technology, should make it possible to build the right cells for the different vehicle classes and their requirements. Sometimes with a high nickel content, sometimes with more manganese – or the cheaper LFP chemistry. With a few adjustments, it should also be possible to build solid cells in the VW factories in the future. However, battery expert Blome does not want to specify when exactly this will be the case – the next big step together with partner QuantumScape is scheduled for the end of the year.

With the ability to produce a wide variety of cell chemistries on one line, VW wants to be able to react not only to development but also to customer demand and, to some extent, to supply chains. If raw materials such as nickel become disproportionately expensive or are simply not available in sufficient quantities, the company can switch to other technologies.

Since PowerCo not only develops and builds the cells, but is also responsible for “vertical integration” – i.e. the procurement of raw materials – VW hopes to achieve the necessary speed to secure the cell supply for the constantly growing eMobility demand. In the future, the process chain of the primary products will be located at the respective factory sites in order to reduce the dependence on Asia for the important primary products.

This also means that the procurement of cell raw materials is the responsibility of Jörg Teichmann, the head of purchasing at PowerCo, and not of Murat Aksel at VW Group Procurement. However, this is where the responsibility for purchasing complete cells from other suppliers such as LG Energy Solution lies – also under anti-trust law, as Schmall emphasises.

Although the chancellor came to the laying of the foundation stone, VW did not claim any state subsidies for the battery factory in Salzgitter. According to Schmall, this decision was made primarily for reasons of speed – the requirements of the IPCEI subsidy, for example, would have slowed down the project. The other factories, however, will receive state support, partly for the construction directly, partly for the search for land or the further training of employees.

The battery factories are to be powered exclusively by green electricity. Volkswagen has installed a large PV system in Salzgitter, and projects are also being planned with energy suppliers in the surrounding area to secure the local supply of green electricity. This is to be implemented at the other locations as well, similar to the approach taken with the preliminary products.

According to Schmall, the company will announce in the coming months exactly where the three cell factories, which have not yet been confirmed, will be built (in addition to Salzgitter, Sagunt and Skelleftea with Northvolt). One factory will be built in Eastern Europe, VW has not yet given any details on plants 5 and 6. According to Schmall, there are several locations on the list and also some favourites.

Incidentally, PowerCo intends to go ahead with the announced supply of battery cells to customers outside the VW Group. “In the first step, we will enter the market for large-scale storage systems relatively quickly,” says Schmall. “In the second step, carmakers who are already platform partners will follow. And only in the third step will we then supply cells to carmakers who are not yet partners today.” Even if Schmall doesn’t call it by its name: Ford, for example, is a platform partner with the production of MEB models in Cologne.

“We don’t do that kind of nonsense!”

Before Scholz and Diess laid the symbolic foundation stone for the “Salzgiga”, Lower Saxony’s Minister President Stephan Weil had addressed 4,000 employees on the early and late shifts at a works meeting. Weil said that in 2019, during a visit to Salzgitter, he had mainly seen questioning faces as to what would become of the jobs in combustion engine and transmission production in times of climate change. “Today provides a convincing answer for Salzgitter and perhaps beyond,” Weil said. “A company like Volkswagen must take responsibility. When a new era begins, you cannot simply leave the old behind. Structural change is not a misfortune, but a task.”

Daniela Cavallo, Chairwoman of the General Works Council, also agrees: “The transformation to electromobility can very well bring good things, good jobs and secure employment.” Salzgitter, she says, should not only become a blueprint for the technical implementation of battery factories, but also for securing employment. “Our competitors are envious when they see what is being created here,” says Cavallo.

The works council leader also recalls the change that the group’s management has undergone. As recently as 2016, the response of “the then CEO” (editor’s note: Matthias Müller) to the demand for an own cell production was clear: “We don’t do that kind of nonsense!” “I’m glad he wasn’t right,” says Cavallo.