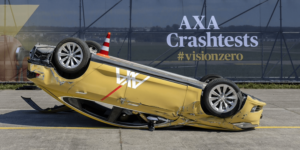 This news is bizarre at best and outrageous at worst – French insurance company AXA faked a Tesla battery fire to “illustrate” the risk they see in electric cars. The insurer has since made a u-turn and delivered an apology that seems overdue.

About a week ago, AXA had published admittedly spectacular images of a burning Tesla, only later turning out they had laid the fire. The insurance now released a statement saying they were sorry if their campaign had been misleading.

“We regret if we have given a wrong impression or caused misunderstandings about electric mobility,” AXA said, following a s*** storm in the media.

German portal 24auto.de had uncovered that the images were essentially fake at first. While it looked like a Tesla car undergoing a crash test and burst into flames, the insurance company later admitted that the test cars were tested without batteries. On top, the testers had then ignited the fire using pyrotechnics to demonstrate the safety hazards an EV battery could pose.

When caught, AXA said the batteries had been removed for the safety of guests watching the tests. This was also their excuse to say that for anyone watching the live presentation, it was clear that staff activated pyrotechnics.

Obviously, that explanation was insufficient.

In today’s statement, AXA found, in retrospect, “that the test and the communication about it could be misleading, especially for interested parties who were not on-site during the crash tests, where the procedures were appropriately commented on and classified”. The insurer added, “The test, which was intended to illustrate an assumed risk scenario, should have been set up differently.”

Very differently, one might add, since AXA had not made the tests entirely out of the blue at least. The insurance company claims their data shows that drivers of electric cars cause 50 per cent more collisions with damage to their own vehicles than those of conventional combustion engines.

However, AXA did not compare vehicles by segment – nor registered actual battery fires – so the data background appears irrelevant. At the same time, electric cars can indeed accelerate quicker, which may be too fast for some drivers – human error, in short.

We’d like to add that Tesla and other electric vehicles have been tested by most auto safety agencies worldwide and usually receive the highest safety ratings.

How to watch self-driving racing cars at a safe distance

California to cut down on power use due to heat wave