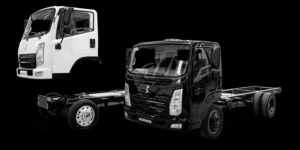 The EV startup Bollinger Motors has presented the B4 electric truck that is in line with US vehicle Class 4 with a gross weight of around 6.4 to 7.2 tons. The debut of the medium-duty vehicles follows Bollinger’s last strategy change announced in January.

Bollinger Motors then announced to focus on commercial electric vehicles after failing to launch the consumer-facing pick-up trucks it had initially envisioned. CEO Robert Bollinger had postponed the B1 and B2 indefinitely on social media, announcing a new focus on commercial vehicles instead. This would allow further development and have a significant “influence on the green future of the automobile,” he said at the time. In other words, Bollinger saw the larger market in commercial electric vehicles, despite their passion for off-road models.

The now announced Bollinger B4 features a rear axle electric drive and utilises an 800-volt platform with LFP batteries. Customers can opt for one or two battery packs, each module claiming around a 100-mile range (160 km), bringing the maximum range to 200 miles.

Unlike the previous pick-ups, Bollinger opted for a cab-forward truck and says it designed the vehicle from the ground up. It was “a radical change from our previous concepts,” said Robert Bollinger. “And that’s on purpose. We listened to our commercial customers and developed what they need for ultimate efficiency.”

Bollinger will test the B4 in real-life with unnamed fleet customers, equipment suppliers and charging companies this autumn.

The Bollinger B4 truck will mark the beginning with US Class 5 and 6 electric trucks (all medium-duty) to follow as announced. Bollinger has reportedly selected Roush Industries as a contract manufacturer. They will produce the new range in Livonia, Michigan, 20 miles from Bollinger’s Oak Park headquarters.

Details on the B4’s market launch and pricing are to follow later. However, Bollinger builds on the US Inflation Reduction Act recently signed into law by President Joe Biden and expects the B4 to be eligible for the 30% tax credit up to $40,000 under the newly created 45W Commercial EV Tax Credit.