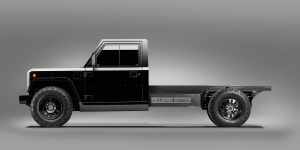 The US electric car start-up Bollinger Motors has put the development of its first B1 and B2 models on hold. Instead, the company wants to focus on commercial vehicles and fleets.

This was announced by CEO Robert Bollinger. The company has been working on an electric all-terrain vehicle called the B1 and the B2 pickup variant for a couple of years, and has already priced these consumer models for 2019. The planned start of deliveries was 2021.

Since then, it has been quiet about the two BEVs. In 2020, Bollinger presented an electric vehicle chassis for third-party customers as well as plans for an electric transporter. After the change in strategy, this is now – for the time being – to become the core of the business model. As Bollinger emphasised via social media, the development of consumer models is only paused, not stopped.

“We started Bollinger Motors in 2015 with a dream and a desire to make the best trucks possible. We’ve put countless hours of hard work and passion into making something that makes us proud,” the CEO said. “However, today, we’re postponing the consumer trucks’ development and shifting our focus to commercial trucks and fleets.”

He added that Bollinger would refund any deposits already made to reserve a B1 or B2. Bollinger did not directly cite reasons for the change in strategy in the video statement. The focus on commercial vehicles allows the company to further develop its technology and thus have a major “influence on the green future of the automobile”. In other words, Bollinger sees the larger market in electric commercial vehicles, despite all the passion for off-road models.

The two models for private customers are to be replaced by four versions of the commercial vehicle chassis. These are positioned in the US classes 3, 4, 5 and 6 respectively and are all to have a range of “200+ miles”, i.e. at least 322 kilometres. The smallest model is designed for a gross vehicle weight of 6,350 kilograms, the Class 6 version for up to 11,800 kilograms.

The versions differ primarily in terms of wheelbase (from 3.53 to a maximum of 6.17 metres) and also in terms of the possible load space. The Class 3 model is specified with up to 800 cubic feet or 22.6 cubic metres, the Class 6 model is said to have up to 1,500 cubic feet or 42.5 cubic metres of loading volume. In addition to box bodies, cranes or tow trucks should also be possible.