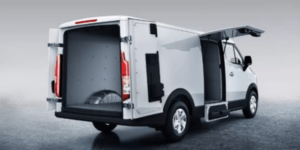 The Cenntro Electric Group from the US state of New Jersey is preparing to launch its Logistar 100 and Logistar 260 commercial vehicle models in Europe. The former is a compact light electric van, the latter a larger model measuring 5.5 metres.

Cenntro claims to have sold or commissioned more than 3,700 vehicles in over 25 countries by the deadline of 31 December 2021. With the launch of two new models in Europe, this number may increase substantially.

The Logistar 100 is described as a compact light van with a WLTP range of 118 kilometres, a payload of 525 kilograms and a load volume of two cubic metres. After receiving EU type-approval in August, the Logistar 100 is scheduled for delivery to Europe this month and will then be available in Asia, the Caribbean and South America. The Americans describe the model as an ideal city transporter, e.g. for delivery companies, dealers, repair companies or caterers. The price is not mentioned in the company’s announcement.

Cenntro plans to follow up with the larger Logistar 260 in the first quarter of 2023. According to the manufacturer, EU type approval is targeted for the end of 2022. The electric vehicle is 5.50 metres long, 1.85 metres wide, 2 metres high and has a load volume of 7.5 cubic metres. Cenntro is not yet disclosing details about the drive system. The only other fact is that the Logistar 260 will have two side loading doors that open upwards as well as rear doors that can be opened up to 270 degrees. Tradesmen, couriers, express and parcel services, and logistics companies are on the list.

Cenntro plans to bring both models to the IAA Transportation in Hanover. The manufacturer’s website lists other vehicles, including the Logistar 200 and 400 commercial vehicles and the small Cenntro Metro, which is to replace the Able in Herne as a result of the majority takeover at Tropos Motors Europe. Both models are confusingly similar anyway. In the spring, Cenntro announced that it would also examine further product launches in Herne with its new European subsidiary.

ENC to source Proterra batteries for buses in California