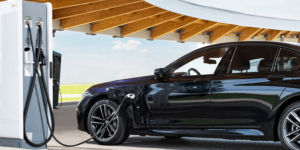 BMW will roll out Plug&Charge in first models starting from mid-2023, enabling customers to charge at public charging points without a charging card or app. That alone is not too new anymore. However, the carmaker told us before the news, that there was something more.

Plug&Charge can indeed make charging easier than refuelling a conventional car. The driver plugs in the EV at the charge point, and the column and car do the rest since the cable carries both power and data. Thanks to the underlying standard ISO 15118, the vehicle authenticates itself and transmits the customer’s contract data stored inside – billing, done, and without needing a wi-fi connection on the driver’s side. No wonder BMW Charging considers the new function “convenient” (though we will get to the earlier difficulties later).

What is more, their offer is indeed “uniquely flexible” as the company suggests. The BMW Group is the first car manufacturer to integrate a multi-contract functionality into their range. Customers may store contracts from at least five different providers in the vehicle and use the charging stations of these operators in the way described.

Yet, there is one condition. Drivers may use charging services beyond their BMW Charging account. However, providers of different charge services stored in the BMW system must be part of Hubject’s eRoaming network. The company in February launched the Open Plug&Charge Protocol (OPCP) to enable free access to Plug&Charge and standardise the emerging ecosystem. Hubject noted at the launch that the protocol “increased the compatibility between all market participants” to develop their Plug&Charge applications. The OCPC is also what allows “multi-contract handling”, such as BMW will offer.

Plug&Charge may look easy from the consumer perspective but held bigger challenges in the backend. Providers needed an appropriate memory to store sensitive information. “The certificate has to be integrated into the vehicle or charging station in such a way that it is IT-protected,” Susanne Koblitz, Head of Charging Technology at Ionity, told electrive in an in-depth interview on Plug&Charge in 2020. The new function would be a simple software solution if a secure memory were available, e.g. in the vehicles, she explained. Yet, it wasn’t for BMW back then since their vehicle hardware was not already made for it like Porsche’s. This is now changing gradually, although BMW has yet to list the Plug&Charge capable vehicles in today’s communications.

Considering this done, users must also select and confirm the corresponding contract in the EVs operating system to start the charging process, so it is more of a Plug-and-Select-then-Charge function in this case. Still, not having to fumble for a fob or card or opening an extra app will be a relief. As an example of a third-party contract to be saved, BMW lists charging at the workplace, where employers may have a separate CPO.

As for its service, the company points to the HPC network Ionity. Initiated by BMW and other carmakers, BMW drivers may soon plugin and ultra-rapidly recharge their vehicles when travelling in Europe.

BMW already has Ionity-specific packages in its tariffs that vary between countries. These are usually coupled with other partners like BP Pulse in the UK. Subscriptions either include or exclude an Ionity subscription that offers preferential rates.

BMW renamed the charging services operated by DCS to BMW Charging and Mini Charging in July 2020; previously, it was known as ChargeNow. The carmaker says it offers access to nearly 200,000 charge points, in the majority AC.

BMW is showing the ‘Multi Contract Plug&Charge’ function for the first time at the Intercharge Network Conference, starting on 12 September in Berlin.