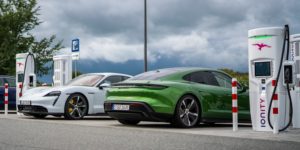 In the coming year, more and more charging stations will be Plug&Charge-capable, thanks to several steps that have been taken behind the scenes. This lays the groundwork from which the automotive industry at large should now benefit. That being said, for the technology to be widely used, one main thing is still missing: a large number of Plug&Charge-enabled vehicles.

Yes, Tesla has again shown the way. Simply plug the cable into the car at a Supercharger, and the charging process begins automatically, billing automatically without any further action on the part of the user. Tesla has a significant advantage here because the proprietary solution only has to be able to communicate and bill between Tesla vehicles and Tesla charging stations. A temporary software glitch this year showed that other cars could also charge at the CCS Superchargers, but weren’t billed.

Many people still don’t realise that Plug&Charge exists. For example, Ionity charging stations in Germany, Norway, Denmark, Sweden, Finland, Italy, and the Czech Republic already allow charging without additional authentication. At the beginning of 2021, Ionity plans to establish the function in twelve other countries in Europe. Why has this gone largely unnoticed? With the Porsche Taycan, only one vehicle model has supported Plug&Charge since October, but the Porsche is not a volume model despite the high demand.

The development of Plug&Charge was a “joint industry effort,” as Susanne Koblitz, Head of Charging Technology at Ionity, told electrive.net in an interview. It was “not a solo effort made by a few companies that developed a proprietary solution for themselves.” Instead, charging point operators (CPO), roaming network operators, the charging network providers (EMP), charging column manufacturers and carmakers jointly worked out a system. “We have built a certificate system as part of Plug&Charge that allows partners to authenticate each other,” Koblitz says. “The important thing is that these chains and communication systems are set up now. If someone new comes on board, they can benefit from this system immediately.” New participants should be able to dock onto this system quickly, whether this is an OEM, CPO or EMP.

But why bother with the certificate system when the much-cited ISO 15118 standard already exists? “ISO 15118 describes only the communication between the vehicle and the charging station,” says the Ionity manager. “In the case of Plug&Charge, it does still specify that a message is sent when a certain task has been completed. All the rest – from the charging station, to the CPO and EMP – had to be worked out.”

The “whole rest” is nothing less than the communication around billing. A certificate pool was set up for this purpose at Hubject. Importantly, this does not require a connection to Hubject’s intercharge roaming platform, only a link to the certificate pool and the ‘PKI Root’ at Hubject. EMPs such as Digital Charging Solutions (DCS) or Shell Recharge must store the customer’s contract certificates in this pool. “The moment the vehicle is connected to the charging station, it is asked whether it is a valid contract and who the contract is from, and this information must be available,” Koblitz explains. “Then, in the roaming process, confirmation of the contract similar to RFID payment is requested directly from the EMP.”

This sounds simple but is complex in practice. “The pure functionality is straightforward to define and implement” explains Koblitz. “The challenge lies in error handling. That’s where the devil is in the details.” The first tests on ISO 15118 communication between the charging station and the vehicle took place at Ionity at the end of 2018, and since then the complexity has been gradually expanded to the current ecosystem. “When it comes to Plug&Charge, people always question the complexity,” Koblitz said. “However, if we leave it to machines to authenticate each other and end up incurring costs, another level of tamper resistance is simply essential.”

The electric vehicle owner can choose the contract

Even with Plug&Charge, customers should not have to commit to a charging contract. “Freedom of choice for customers is very important to the vehicle manufacturers,” says Ionity manager Koblitz. “The customer has full contractual freedom and is free to choose their provider contract and thus the contract certificate.” Markus Bartenschlager, Managing Director at DCS and thus responsible for some OEM charging services such as those of Audi, BMW, Mercedes and Hyundai, agrees: “The Plug&Charge implementation according to ISO 15118 provides in principle that the charging contracts of different EMPs can be linked in the vehicle.”

This also means that if this secure storage does not exist, it still has to be installed or Plug&Charge will not work. In the case of cars, it depends on how the manufacturers have designed their vehicles. While Porsche, for example, says that even units of the Taycan that have already been delivered can support Plug&Charge – because the hardware is prepared for it – the situation is different at BMW, for example. According to a BMW spokesperson, the manufacturer’s vehicles require hardware changes, which means that cars that have already been delivered will not support Plug&Charge – not only older i3s but also the first iX3s.

Even if the vehicle does support the technology, there will initially be something of a patchwork effect. Not every charging station will support Plug&Charge, not every CPO will immediately upgrade, even if it is available. “Having overcome the chicken-and-egg problem in other areas of e-mobility, we are now experiencing the same phenomenon with Plug&Charge,” says DCS manager Bartenschlager. “For all market players, Plug&Charge represents a certain investment  both for the infrastructure operators, the vehicle manufacturers, but also the e-mobility service providers.”

What all of this means, is that until widespread availability is achieved, Plug&Charge capability needs to be added as another variable to the database when planning a route. According to Bartenschlager, customers should be able to actively filter so that their charging stops are scheduled at a Plug&Charge-capable station. In case of doubt, the driver will notice at the latest when plugging in the cable whether the charging process has started. Bartenschlager, therefore, demands “reliable data” from CPOs on which charging stations customers can charge with Plug&Charge. “This information is crucial for the user.”

When asking manufacturers about their rollout plans, the near-term outlook remains uncertain. “At the current time, Plug&Charge is not yet part of the BMW Charging offering. Further development of the offering is in the works. Still, it is too early to communicate a concrete timeline for this,” BMW says, for example, although important premieres are coming soon with the iX3, the i4 and the recently unveiled iX. “The biggest challenge lies in the consistency of all the necessary elements, starting with standardisation and continuing with the integration of the individual product’s vehicle, charging point and energy supplier, as well as legal standards, regulation and data protection.” The company is therefore focusing on solutions “that enable our customers to charge more and more conveniently at all available charging points.”

When asked, VW says that it sees Plug&Charge as an essential convenience feature and will introduce the technology to vehicles in the coming year. “The pioneering role within the Volkswagen Group will be played by the premium brands Audi and Porsche, and the Volkswagen brand will then roll out Plug&Charge more widely,” a VW spokesperson said. However, the German carmaking giant did not want to answer specific questions about hardware changes and the Plug&Charge capability of existing vehicles at the current time.

Nevertheless, charging expert Bartenschlager sees an “exponentially increasing interest from all stakeholders.” “We are therefore firmly convinced that Plug&Charge will successfully establish itself in the next one to two years. Incidentally, we see this development not only in Europe but also in the US and China.”

>> Reporting by Sebastian Schaal in German on electrive.net