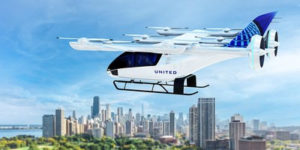 United plans to buy up to 500 electric air taxis. The US airline has not only invested 15 million dollars in the manufacturer Eve Air Mobility, but has also signed a purchase agreement for 200 air taxis – including an option for another 200. Deliveries are to begin in 2026.

The air taxis on order are four-seater electric aircraft. Under the agreement, the companies intend to work on future projects, including studies on the development, use and application of Eve’s aircraft and the urban air mobility (UAM) ecosystem, according to a statement.

The collaboration also gives United Airlines access to Embraers’ service centres, spare parts warehouses and service engineers. Once in service, the company will be able to have its entire eVTOL fleet serviced by Eve’s service and support operations, it adds. In addition, United is joining the Eve-led consortium that will simulate UAM operations in Chicago starting this week.

“United has made early investments in several cutting-edge technologies at all levels of the supply chain, staking out our position as a leader in aviation sustainability and innovation,” said Michael Leskinen, president of United Airlines Ventures, the airline’s corporate venture fund. “Today, United is making history again, by becoming the first major airline to publicly invest in two eVTOL companies. Our agreement with Eve highlights our confidence in the urban air mobility market and serves as another important benchmark toward our goal of net zero carbon emissions by 2050 – without using traditional offsets.”

United Airlines said it was the first major US airline to establish a corporate venture fund, United Airlines Ventures (UAV). As a result, the airline is leading the industry in investments in eVTOL and electric aircraft, hydrogen fuel cell engines and sustainable aviation fuels, the company says.

According to the information, United already made a down payment of ten million dollars for 100 air taxis last month with a California-based eVOTL company that was not named in the announcement; it is likely ZeroAvia, whose collaboration with United we have reported on. With the latest agreement, the company is targeting up to 500 air taxis to expand its fleet.