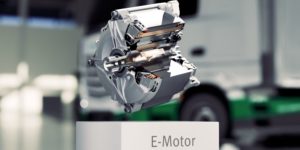 Schaeffler has developed a new electric motor product family for trucks with oil cooling, an efficiency of over 97 per cent and a continuous drive power of up to 300 kilowatts. In addition, water-cooled electric motors with 800 volts can also be seen at the IAA Transportation in Hanover.

First to the new, oil-cooled drive family: according to Schaeffler, another special feature is the stator’s rod shaft winding, which is intended to ensure a particularly high power density of the e-motors. According to Schaeffler, only a few companies worldwide have mastered this winding technology. In combination with the “innovative oil cooling”, which is not described in detail, not only the high continuous power but also the high efficiency of the drive is to be achieved – with the usual durability requirements for trucks. However, the supplier does not say when these motors will be installed in series-produced vehicles for the first time.

The first electric motors for trucks from Schaeffler will go into series production in 2023. However, these are not oil-cooled motors: the second product family of water-cooled 800-volt motors delivers a maximum continuous output of 180 kW and a maximum torque of 950 Nm. This order, which will go into series production in 2023, was announced in 2021.

To match the 800-volt motors, the supplier is also developing silicon carbide-based power electronics specially adapted to the requirements of electric commercial vehicles, which are designed for voltages of up to 850 volts and for effective currents of 600 amperes (peak power) or 400 amperes (continuous power) – here, too, all electrical and mechanical components have been designed for the considerably higher mileage of heavy commercial vehicles. Another important feature is that the power electronics can also be connected to the regular vehicle electrical system via a 24-volt DC connection.

There is a simple reason why Schaeffler develops not only a few motor variants, but entire motor families: With the comparatively small production volumes of commercial vehicle drives, such scalable series help to efficiently cover all performance classes on the demand side – without expensive special developments. The motors are therefore designed in such a way that they can be used both on-road and off-road, in fully electric and hybrid drives and both in an electric axle and as a central drive.

Schaeffler will be exhibiting at the IAA Transportation 2022 in Hanover next week, where it will also be presenting its thermal management solutions for electric commercial vehicles. Schaeffler sees the latter as a “key competence” for electric commercial vehicles. “For fleet operators, this is a matter of hard cash, because the shorter the charging time of the vehicles, the faster they are back on the road,” says Jochen Schröder, Head of Schaeffler’s E-Mobility division.