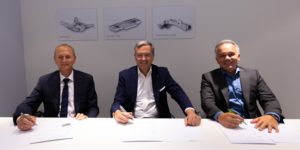 The German machine manufacturers and production specialists Manz, Grob-Werke and Dürr have entered strategic cooperation to equip complete battery factories. They will join forces in acquisition and project processing to exploit potential growth.

According to a statement by Manz, said growth potential is in particular in delivering production technology for lithium-ion batteries for e-mobility. Here the aim is to cover the entire value chain together with Dürr and Grob-Werke. As part of the partnership, the southern German companies plan to establish themselves as a European system provider of battery production equipment and offer customers a high-performance alternative to the equipment suppliers that have mostly come from Asia.

Manz is known in the battery industry for its cell contacting systems, among other things, but is also active beyond this and has experience in key production steps for manufacturing different lithium-ion cell types and assembling them into a battery module. Manz develops battery technologies and associated production processes for its shareholder Daimler Truck.

Grob-Werke, a manufacturer of battery production and automation systems, is also already active in the field and more eMobility areas.

Dürr is well-known in the automotive industry with its production systems and an experienced plant manufacturer. The company also adds expertise in electrode production and other production steps in cell and module assembly.

The three companies want to “set innovative machine standards made in Europe,” according to their statements, for the announced battery factories in Europe of various cell manufacturers and carmakers.

Their complementary capabilities appear to enable indeed the partners to cover the entire value chain in Li-ion battery production and to support them in meeting the significantly growing demand for high-quality and high-performance batteries in Europe. In addition to automotive customers, the company is also considering projects in the stationary storage and consumer electronics sectors, reads the statement.

Manz is also a partner in the Gigagreen consortium announced this week. The EU project, which has been launched, aims to develop sustainable processes for producing lithium-ion battery cells for electric vehicles. Sixteen partners from eight European countries are working on the project to create the “gigafactory of the future”. The Gigagreen consortium will work together for four years, during which time it will receive nearly €4.7 million in EU funding.

“We see fantastic opportunities to benefit from the dynamic development of electromobility, so we have focused our business model accordingly,” says Martin Drasch, CEO of Manz AG. “We firmly believe that based on the trendsetting alliance with Grob and Dürr — an alliance unique in Europe — we have reached another important milestone toward fully harnessing the huge market potential.”

German Wankmiller, CEO of the Grob Group, added: “We are delighted to be cooperating with Manz and Dürr, two such well-respected partners.” He said that the family-owned company had gained “comprehensive knowledge of machines, system technology, and process flows for the entire e-mobility portfolio” and that it was a “world market leader” in production systems for electric drives. With a focus on systems engineering, they also had “developed process knowledge for battery module and pack systems with pouch and hard-case cells, and we have already delivered several large-scale plants,” he said.

“Battery production is one of the fastest-growing sectors in the European industry landscape. The rapid building of production capacity is a prerequisite for European automotive manufacturers,” added Dürr CEO Jochen Weyrauch. “Our customers want reliable, local partners to implement their battery factories. We are taking on this challenge and are joining forces.”

Batteryloop to give Mercedes batteries a second life