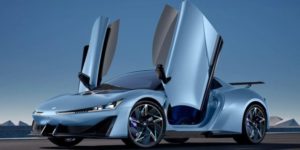 GAC Aion, the electric car subsidiary of the Chinese GAC Group, has presented its new premium brand Hyper and its first representative Hyper SSR. The model is an all-electric super sports car with gullwing doors and a maximum output of 913 kW.

The new Aion Hyper brand is, as the name suggests, intended for hypercars. For this  GAC has initiated a cooperation with the China National Space Administration and founded its own research facility called Hyper Scientific Research Laboratory. The aim is to make progress in the fields of aerodynamics, innovative materials and AI control, among others, according to Chinese media reports. The scientific and technological achievements will then be reflected in Aion Hyper’s products.

GAC unveiled the Hyper SSR as the first representative of the new brand. The supercar will be available in two versions. The regular version can accelerate from 0 to 100 km/h in 2.3 seconds and will be offered at a pre-sale price of just under 1.3 million yuan (around 190,000 euros). The other version, Hyper SSR Ultimate, costs just under 1.7 million yuan (around 240,000 euros) and can sprint from 0 to 100 km/h in 1.9 seconds.

Although it is clear that the Hyper SSR will be produced and delivered from October 2023, as yet, no information has been revealed about the planned number of units. GAC Aion has also published only rudimentary data on the technology used. The super sports car will have a torque of 12,000 Nm and will be based on a 900-volt platform. Large parts of the vehicle are made of carbon fibre and the interior will feature a 14.6-inch multimedia display and an 8.8-inch instrument cluster.

GAC only recently announced that it would set up subsidiaries for the production of electric drives and batteries. This is GAC’s way of increasing its own value addition in electric cars. GAC Aion has the capacity to build up to 200,000 electric cars per year since expanding its first plant in Guangzhou. When the company’s second plant goes into operation in December, the production capacity will be 400,000 cars per year.