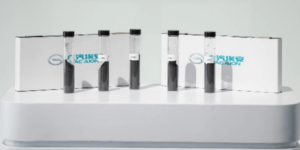 The Chinese car company GAC has announced the foundation of a subsidiary for the industrialisation of its own battery business. The new company, named Lvqingg, will probably focus mainly on LFP batteries and build its own battery factory.

The newly formed company Lvqingg will be 51 per cent, 40 per cent and 9 per cent owned by GAC Aion, GAC Motor and GAC Business, respectively, with a capital of 10.9 billion yuan (1.59 billion euros). GAC Aion, as the brand for the New Energy Vehicles, will thus have majority control over the company.

Lvqingg will deploy GAC’s new LFP battery technology, according to the announcement, and is expected to start building a battery cell factory by the end of this year, with an annual capacity of 26.8 GWh to be completed in 2025. A location is not yet known, but as is usual for GAC, the factory will probably be built in or around Guangzhou.

As recently reported, GAC is also investing 2.16 billion yuan in the establishment of a subsidiary for the production of electric drive systems. With this, GAC wants to increase its own added value in electric cars.

Celgard separators for ABF’s LFP batteries in the US