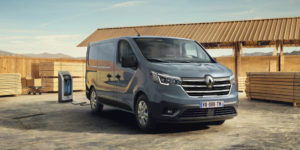 The Trafic E-Tech Electric is based on the third generation of the Trafic, which has already been on the market since 2014. The electrically powered model will be available in two lengths of 5.08 (L1) or 5.48 metres (L2) and in two heights of 1.97 or 2.5 metres. Renault has not yet announced a specific sales launch date or price information.

The electric Trafic combines a 90 kW engine and a 52 kWh battery. We are familiar with the engine from the recently introduced new-generation Kangoo Rapid E-Tech Electric (with a 45 kWh battery). The Master E-Tech Electric (with a 57 kW motor) now has the battery installed in the E-Trafic. These are the two “closest relatives” of the newly electrified van in the Renault range.

According to Renault, the E-Trafic will have a WLTP range of up to 240 kilometres. Charging power is 7 kW AC (single-phase) or 22 kW AC. Only the price list will show which AC charger is actually installed in the actual variant. The DC fast-charging capacity is 50 kW DC, not ex-works but optional. The French manufacturer also states a payload of up to 1.1 tonnes and a towing capacity of up to 750 kilograms. The stowage volume is 5.8 to 8.9 cubic metres, depending on the version, and the maximum loading length is up to 4.15 metres in the long L2 version thanks to a through-loading flap embedded in the bulkhead.

As usual with its light commercial vehicles, Renault emphasises the modular variety of variants and equipment. For example, the E-Trafic will also be available as a platform chassis. In addition, there will be “new safety features and a modern multimedia system”. Details will certainly be available when the model is unveiled at the IAA Transportation, which starts tomorrow.

It is now just over three months since Renault refreshed its electric commercial vehicle range: With the new Kangoo Rapid E-Tech Electric, the French carmaker presented the second generation of its battery-powered compact van in June. The striking feature is the better charging performance compared to the E-Trafic and E-Master: the E-Kangoo comes with an 11-kW or optional 22-kW AC on-board charger as standard. Depending on the version, fast charging with direct current and a charging power of 80 kW is also possible.

Renault has not overhauled the larger Master E-Tech Electric but has revised it in a few places. For example, the battery capacity has increased from 33 to 52 kWh and thus the range to 200 kilometres according to WLTP. In addition, unlike before, DC charging is now possible, albeit rather slowly.

A 22 kW DC charger is available for the electric Transporter, while the AC on-board charger has a standard output of 3.7 kW. While the E-Trafic will come off the production line in Sandouville, France, the Kangoo Rapid E-Tech Electric will be manufactured in Mauberge and the Master E-Tech Electric in Batilly.