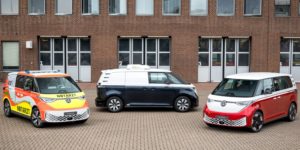 At the IAA Transportation, Volkswagen Commercial Vehicles unveiled four near-production studies of the all-electric ID. Buzz from bodybuilders. These include not only an electric emergency ambulance and a refrigerated vehicle, but also a service van for the electrical appliance manufacturer Miele.

VW Commercial Vehicles has cooperated with various body manufacturers for the four concept vehicles. The first emergency ambulance based on the ID. Buzz was designed by Bösenberg. Up to three people can be accommodated on board the first ID. Buzz emergency ambulance. The load compartment was converted into a workplace for the doctor and his medical equipment.

With the ID. Buzz Flex-Cab concept, a kind of electric Caravelle for passenger transport. The three-seater bench seat in the rear can be used in two positions, but can also be folded up electrically including the seat surface. In this way, people can be transported with the comfort legroom, people and luggage with the standard legroom and goods with the rear bench folded up.

The body manufacturer Wükaro has converted the ID. Buzz into a refrigerated vehicle. From the outside, the conversion is only recognisable by the additional roof unit. Thanks to four batteries, the 230-volt refrigeration system works independently of the van’s electric drive for six to eight hours. Depending on the equipment, the study can carry a payload of up to 390 kg – “sufficient for frozen food ordered online, specialities for restaurants or for the reinvention of the classic Italian ice cream van”, says VWN.

The body specialist Veth presented a box truck variant of the vehicle with a load volume of six cubic metres and a payload of 680 kilos: the first ID. Buzz with box body. The box thus exceeds the 3.9 cubic metres of the ID. Buzz Cargo. Since the aerodynamics suffer from the angular body, the range will probably decrease. Since the box (with classic doors, sliding doors and/or louvres as desired) is intended for courier drivers, the range will probably not be an issue in urban delivery operations.

Beyond the four special bodies, VWN has a fifth ID. Buzz Cargo on its stand in Hanover, which is characterised by a special interior design. In cooperation with the company CS/Würth, an ID. Buzz Cargo with a new shelving system as a Miele service van. The load compartment of the electric van is equipped with a shelving system designed to meet the requirements of service staff for the storage of materials, spare parts and tools for Miele customer service.

On the sidelines of the IAA Transportation, it was also announced that Miele is one of the first companies to use the new ID. Buzz Cargo in customer service. Five all-electric vehicles will be deployed in Germany, Austria, Great Britain, Norway as well as Spain directly at the market launch and have been adapted to the individual requirements of Miele’s customer service with the interior fittings. According to the Gütersloh-based company, additional vehicles are scheduled to enter service in 2023. However, Miele does not specify how many will be depoloyed.