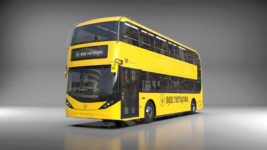 British bus builder Alexander Dennis (ADL) has received an order for 50 electric double-decker buses from Transport for Greater Manchester. The buses are planned for the first phase of the Bee Network bus system that is due to launch in Wigan and Bolton in September 2023.

The electric buses will be built in the UK at the Alexander Dennis factory in Scarborough, North Yorkshire, and will be subsidised through the UK government’s ‘City Region Sustainable Transport Settlement’. They will be used in two cities in Greater Manchester, namely Wigan and Bolton. The new bus concession system for the metropolitan region, called Bee Network, will be introduced in these areas on 17 September 2023. From 2024 onwards, other parts of Greater Manchester will then be connected to the new transport system.

The Bee Network is designed as a fully integrated transport system following the London model and will include and cater for buses as well as trams, walking, cycling and eventually trains. Andy Burnham, the Mayor of Greater Manchester, says that this involves “the return of buses to municipal control”. Next year, Alexander Dennis’ electric double-decker buses will be the first to carry the black and yellow branding of the new Bee Network.

Although not revealed in press statements, it is most likely that the 50 electric buses will be the Enviro400 EV model, produced through the manufacturer’s cooperation with BYD, which is the only electric double-decker model the company has available before the end of 2023. ADL is also planning to expand its range with new electric buses, which will be developed entirely in-house. According to a company statement from August, these will not be delivered to customers until late 2023.

The Enviro400 EVs, which are around ten metres long, are the result of close cooperation with BYD. The vehicles are based on a BYD chassis and are also equipped with an LFP battery pack from the Chinese vehicle and battery manufacturer. The bodywork comes from ADL.