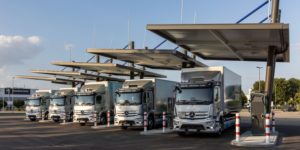 A new report by Price Waterhouse Coopers Strategy (PwC) attests to a bright future for zero-emission trucks. BEVs are forecasted to outperform internal combustion engine technology within the decade. Worldwide, PwC analysts expect zero-emission models to essentially replace conventional trucks within the next 15 years – given that infrastructure is catching up.

As early as 2030, zero-emission vehicles powered by batteries or hydrogen fuel cells will account for one-third of all trucks in Europe, North America and Greater China, write the consultants in the report titled ‘The dawn of electrified trucking: Routes to decarbonising commercial vehicles’. By 2035, PwC Strategy& expects the electric share in these markets to rise to around 70 per cent.

Factors driving the relatively rapid decarbonisation are two-fold: increasingly strict regulatory requirements and simultaneously decreasing total cost of ownership (TCO) for ZEVs. In the short term, the war in Ukraine was also forcing European governments to realign their energy policies to reduce their dependence on fossil fuels, so PwC.

However, the accelerated energy turnaround also feeds positively into the consultancy’s concrete total cost-of-ownership analysis. The study attests that battery-electric trucks will reach a cost advantage of ~30% over internal combustion engine vehicles in 2030. Energy costs largely drive the TCO here, so the report, with variances in future energy prices resulting in TCO shifts of up to ± 14 €-ct/km change versus the base scenario.

PwC also expects decreasing vehicle costs due to lower battery costs, for example, and increased public acceptance so that electric trucks will start making more economic sense than any other technology as early as 2025. Of course, in the short-term, fleet electrification efforts have to mitigate electricity price risks.

“The transformation is currently picking up tremendous speed,” said co-author Jörn Neuhausen when speaking to Wirtschaftswoche. Driving the change, he said, were legal requirements and the growing cost advantages for e-trucks. In Europe, they are expected to pay only half as much toll from May 2023. “Logistics companies can thus save up to 25,000 euros per truck per year.” On the other hand, truck manufacturers must pay increasingly higher penalties for exceeding the ever-stricter CO2 limits.

Infrastructure investments will be key to the transformation of logistics

Still, there is the question of infrastructure, of course, phrased as a “key prerequisite for ramp-up” by the analysts. Price Waterhouse estimates that no less than 36 billion euros would have to be invested by 2035 for a nationwide network of charging and hydrogen filling stations in Europe alone. According to the study, to have enough green electricity for the e-trucks, up to 21,000 additional wind turbines will also be needed.

The consultancy also delivers vehicle unit numbers. In 2030, they expect 25-35% of BEV and fuel cell truck production in the triad markets, which translates into 200,000 units in North America and Europe, respectively, and half a million units in Greater China for the 70% ZEV share in 2035, as mentioned above.

Translated to truck battery demand, this will require 170 GWh in Europe by 2035 and another 800 GWh in North America and China.