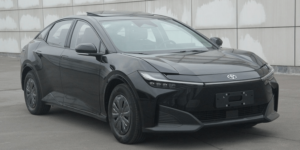 Toyota has announced plans to start production and sales of a small electric sedan powered by BYD batteries by the end of the year in China as part of an ongoing collaboration with BYD, according to three people close to the Japanese carmaker.

The compact EV ‘bZ3’ was developed specifically for the Chinese market and will be the second model in the ‘Beyond Zero’ lineup of battery-electric vehicles from Toyota. The first ‘bZ’ car, the bZ4X sport-utility vehicle, was supposed to be released in China earlier this year, but a global recall of the car forced Toyota to suspend production of the model globally.

Toyota has been under fire for some time for doing too little to eliminate emissions in their supply line as well as developing emissions-free vehicles, despite being quite ahead of the curve when they released the Prius. The tables turned significantly, as the manufacturer known for developing the first commercially successful hybrid vehicle is now threatening to leave the UK due to their upcoming emissions standards.

Not much detail has been revealed about the upcoming electric car, although one of the sources stated that the bZ3 would likely sell for around 200,000 yuan, equivalent to around $28,000.

According to the sources, Toyota had planned to unveil the bZ3 at the Beijing auto show in April, but the event was cancelled because of the COVID-19 pandemic. The car was also to include BYD’s blade batteries, which will likely play a major role in Toyota’s vehicle battery supply chain until they manage to set up their own battery production.

Whether this model will remain in China or be adapted for export beyond the country is still unclear. However, if Toyota plans to stick to its plan of having 30 electric vehicles available by 2030, it is likely that this vehicle will be adapted for global markets.