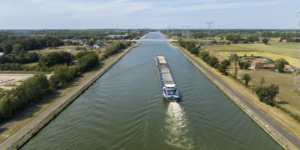 The shipping company Future Proof Shipping (FPS) and the shipbuilder Holland Shipyards Group, and other partners, have launched a project to convert a fleet of ten inland and short sea vessels to hydrogen fuel cell propulsion.

As the first ship of this project, the “FPS Maas” is now being converted. The ship’s last diesel voyage went from Belgium to Rotterdam, from where it continued to Holland Shipyards‘ nearby facility in Werdendam. There, the container barge’s diesel propulsion system will be removed and a new modular propulsion system installed.

This will consist of electric motors, hydrogen tanks, a fuel cell system and a battery system with an energy content of 504 kWh. The battery system is from EST-Floattech. “EST-Floattech is one of the few that can supply the battery power required for the FPS Maas, says Fokke van der Veen, Director Operations at FPS. “We look forward to a constructive partnership in battery technology, not only during delivery and integration but also during our operation.”

Details of the e-drive, fuel cell system and hydrogen tanks are not yet available. Companies involved in the project include Nedstack Fuel Cell Technology, Kooiman Marine Group, Air Liquide and BCTN Network of Inland Terminals. Although the company has not yet revealed anything about the infrastructure for the hydrogen ship, it has said that as soon as the converted FPS Maas is back in service, it will transport container freight between Rotterdam and Antwerp – emission free.

FPS intends to build and operate a fleet of a total of ten emission-free inland and short sea shipping vessels. The shipping company has not yet disclosed details of the other nine ships. On its homepage, the company announced in July that it had taken over the “FPS Waal” as its second inland container ship. The company has not said by what date the “Waal” will be fully converted.