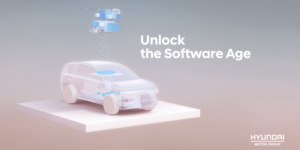 The Hyundai Motor Group, including its brands Hyundai, Genesis and Kia, has announced a new global strategy through which all of the group’s vehicles are to become software-defined vehicles (SDVs) by 2025 – and increasingly electric. The (drive) hardware is to be further standardised for this purpose.

From 2023 onwards, all newly introduced vehicles of the Hyundai Group will have the ability to receive OTA (over-the-air) software updates. By 2025, all of the group’s vehicles sold worldwide will then be software-supported. By this time, Hyundai also wants to reach 20 million vehicle registrations in the group’s “Connected Car Services” (CCS).

In 2025, the Group will also introduce vehicles based on the two new electric vehicle platforms, eM for passenger cars and eS for special vehicles. The platforms will be developed based on the Group’s Integrated Modular Architecture (IMA) system.

According to the announcement made by the South Korean group today, the eM platform will serve as the basis for electric cars “in all segments” (i.e. from small cars to five-metre-long sedans and SUVs) and will offer a 50 per cent higher range than the Group’s current electric cars. Measured against the Ioniq 5 and Ioniq 6 e-GMP vehicles, this would mean around 750 kilometres for the mid-size crossover and 900 kilometres for the mid-size sedan – based on WLTP ranges of currently 507 and 610 kilometres respectively. The eM platform is expected to enable OTA software updates and is also being developed to support autonomous driving technologies at Level 3 or higher.
Hyundai plans Global Software Centre

The eS platform is a so-called skateboard platform intended exclusively for use in purpose-built electric vehicles (PBVs). It has a flexible structure to meet business-to-business requirements and enable customised solutions for delivery, logistics or ride-sharing services.

The software was presented at a global online forum entitled “Unlock the Software Age”. By 2025, a separate operating system called “Connected Car Operating System” (ccOS) is to be developed for the (electric) vehicles, which will then enable OTA functions on a large scale. To this end, the group plans to invest a total of 18 trillion won (around 13 billion euros) by 2030, including in a new global software centre.

“By transforming all vehicles to Software Defined Vehicles by 2025, Hyundai Motor Group will completely redefine the concept of the automobile and take the lead in ushering in a never-before-experienced era of mobility,” says Chung Kook Park, head of research and development at Hyundai Motor Group. “Creating visionary vehicles empowered with the ability to evolve through software will enable customers to keep their vehicles up to date with the latest features and technology long after they have left the factory.”

Both the customers and the company should benefit from the new approach. Based on the data collected, customers are to be offered tailor-made services. Hyundai is also planning to introduce feature-on-demand (FoD) services as early as next year, in which certain functions and equipment features will be unlocked via over-the-air updates. In combination, the software platforms and the unified hardware components of the eM and eS platforms should reduce the complexity of the vehicles, which in turn should result in lower development costs and shorter development times.

Lexus gives the US 300e a bigger battery pack