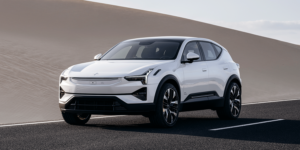 Polestar has unveiled its first electric SUV, the Polestar 3. This latest model by the EV brand, rooted in Sweden and growing via China, has a sizeable long-range battery and plenty of power and claims to be “desirable for all the right reasons”. Yet how sustainable can an electric SUV with a 111 kWh battery be?

The Polestar 3 is not only the brand’s first SUV but also the first model designed as a Polestar car from the start. Take the Gran Turismo coupé Polestar 1, for example, and the kinship to Volvo models of the time is unmistakable; the Polestar 2 sedan was also intended as a Volvo model following the S40 in style in the early concept phase and only later became Polestar’s first purely electric model.

About the new model, Polestar states that it combines “Scandinavian minimalism and purity” were out together with the “key ingredients of a sport utility vehicle” to define nothing less than “the SUV for the electric age”.

However, a look at the technical data – some already known – shows little sign of minimalism. In the dual-motor model out for launch, the standard trim has an output of 360 kW with a max torque of 840 Nm. Opt for the Performance Package, and the output reaches 380 kW and 910 Nm. And contrary to earlier reports, it is not a dual-motor drive with two e-motors on the rear axle but an electric all-wheel drive with one motor per axle. Nevertheless, the system allows for torque vectoring on the rear axle, and Polestar says there was a “power bias towards the rear”. To achieve this effect, they further developed the dual-clutch function of the Polestar 1 for electric torque vectoring. This allows the targeted supply of power to the outer and inner wheels and complete decoupling. The mechanically decoupled PSM on the rear axle thus runs without resistance, reducing consumption in pure front-wheel drive mode.

The battery’s nominal capacity is 111 kWh; Polestar does not specify the usable net energy content. The range of up to 610 kilometres, according to WLTP, is a provisional value. The company will publish final energy consumption and range figures in 2023. Since the vehicle is officially called the Polestar 3 Long Range Dual Motor, a standard range variant with a smaller battery is also likely, as with the Polestar 2. However, there is no information on this yet – not even on a theoretically possible single-motor model.

Let’s content ourselves with published facts: The aluminium battery housing contains 204 prismatic cells grouped in 17 modules (i.e. 12 cells each). Polestar has yet to name the cell supplier but has previously worked with CATL and LGES. The battery has liquid cooling and works with the standard heat pump. This allows the vehicle to use ambient heat for air conditioning and battery conditioning.

The Polestar 3 charges via an 11 kW AC onboard charger or via DC with up to 250 kW. The latter figure is telling, as Volvo has not yet specified a DC charging capacity for its platform brother, the EX90. Like the EX90, the Polestar 3 will also be equipped with a charger for bidirectional charging, so there will be vehicle-to-grid functions in future. However, the company announced no concrete project in this direction at the Polestar 3 premiere. By the way: The charging socket is located above the rear wheel on the driver’s side, just like in the Polestar 2.

Ex works, the Polestar 3 is equipped with a dual-chamber air suspension, which comes combined with “advanced chassis control”, as Polestar adds. The vehicle can electronically adjust its active damper speed every two milliseconds (500 Hz), switching between more comfortable and dynamic suspension characteristics.

Concerning the body design, there are no surprises, given Polestar’s previous communications, which included prototype pictures early on and a shot of the undisguised vehicle. What is news is the dimensions: the car measures 4.90 metres with a wheelbase of 2.985 metres. Including mirrors, the SUV is 2.12 metres wide and 1.61 metres high. The unladen weight is between 2,584 and 2,670 kilograms, and the towing capacity is 2.2 tonnes. In addition, a roof load of 100 kilograms is possible. Under the front bonnet is a 32-litre frunk for charging cables, while the boot can hold between 484 litres (seats up) and 1,411 litres (seats folded down) – 90 litres under the boot floor are included in both cases. 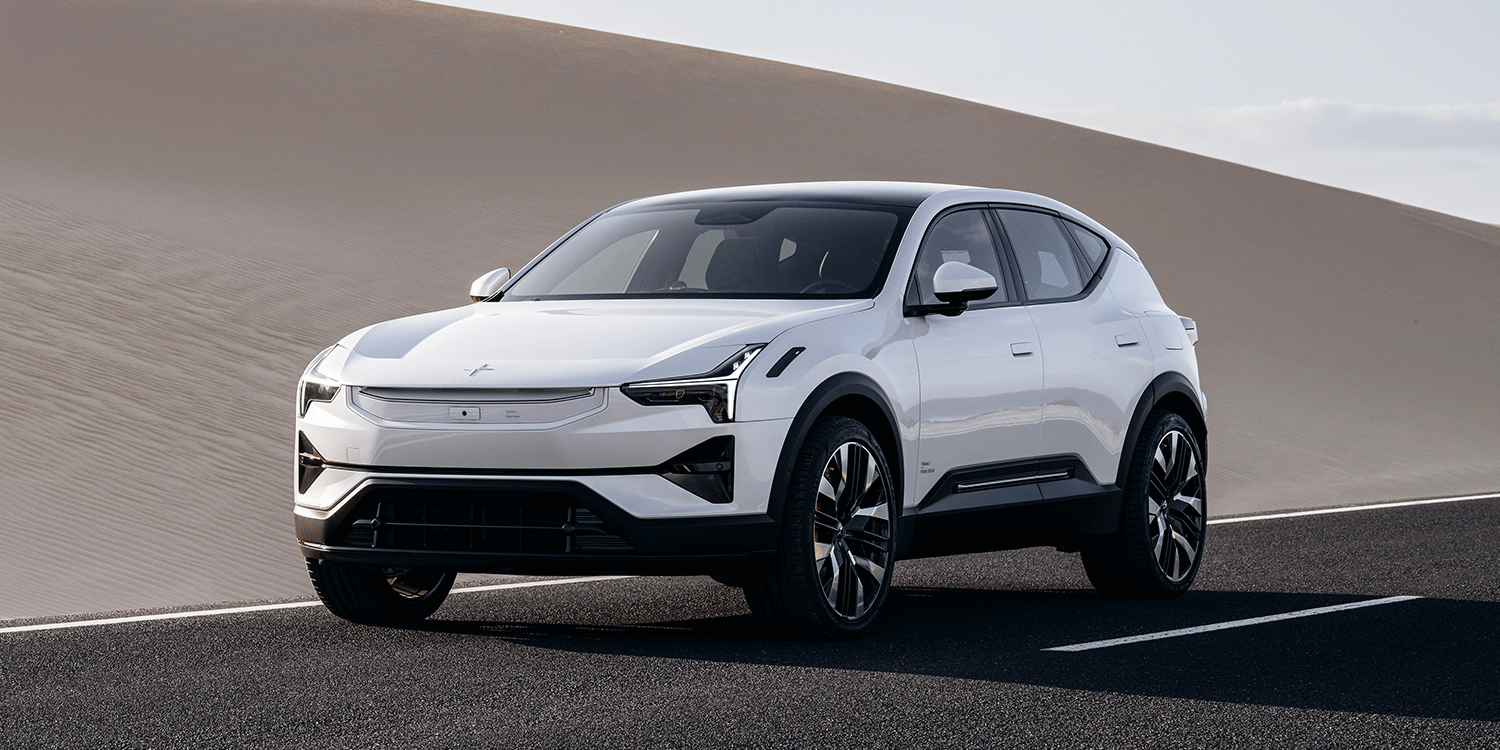 The only unusual design element is the front view: there is still a hint of the typical Polestar “radiator grille” that the company converted into a “Smart Zone” with sensors, a heated radar module and a front camera. It still looks somewhat jagged; at the upper end is an air intake that directs the incoming air over the front bonnet. Polestar calls this the “front aero wing”. Despite such aerodynamic tricks, the cW value is 0.29, and Polestar gives the flow resistance 0.78 cWA.

As standard, the Polestar 3 has five radar modules, five external cameras and twelve ultrasonic sensors. While Volvo has already announced that the EX90 will have a Lidar unit as standard, Polestar’s Lidar system from Luminar is part of the optional Pilot Package, which should be available to order from the second quarter of 2023. In addition to the Lidar units, the package includes an additional control unit from NVIDIA, three cameras, four ultrasonic sensors and a cleaning function for the front and rear cameras. The Polestar 3 also has radar sensors in the interior that can detect movements in the sub-millimetre range. This shall prevent children or pets from being unintentionally left inside the vehicle. The system also links to the air conditioning system to avoid heat stroke or hypothermia.

Speaking of the interior: “Materials used inside Polestar 3 have been selected for their sustainability credentials while raising premium aesthetics and luxury tactility,” says the company. “These include bio-attributed MicroTech, animal welfare-certified leather and fully traceable wool upholsteries.” This is where Polestar wants to score with sustainability.

The interior also features the Scandinavian minimalism mentioned at the beginning: The design looks very tidy, the open-pore wood familiar from the Polestar 2 and a continuous air vent provide a clean but elegant look. Since the Polestar 3 is based on an all-electric platform, there is also an open centre console, unlike before. For the infotainment, the upright touchscreen remains. It is now 14.5 inches in size and continues to use Android Automotive OS as its operating system,  including OTA functionality.

For the infotainment hardware, Polestar uses Qualcomm’s Snapdragon Cockpit platform. In addition to the touchscreen, there is also a high-resolution cockpit display for the driver. However, this is also free-standing and not integrated into a more classic cockpit layout as in the Polestar 2.

The Polestar 3 will be available for order in the launch markets of North America, Europe and China at a price starting at 89,900 euros; the Performance Package costs 6,600 Euros extra. Polestar revealed to electrive that US pricing would start at $83,900 for the standard car (ex VAT). UK prices come in as £79,900 OTR.

Polestar will initially manufacture the new EV at Volvo’s plant in Chengdu, China, starting mid-2023 so that deliveries will hit in Q4/2023. From 2024, production will follow at Volvo’s Ridgeville plant in the US state of South Carolina. Polestar expects the first deliveries from this plant around mid-2024 and, from then, will supply Polestar 3 vehicles to North America and “other markets” from the US plant.

Thomas Ingenlath, Polestar CEO said the Polestar 3 “takes our manufacturing footprint to the next level, bringing Polestar production to the United States.”

>> Info via email; with reporting by Sebastian Schaal.