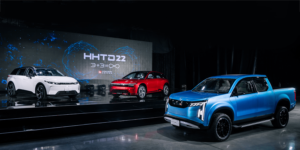 The Taiwanese contract manufacturer Foxconn presented prototypes of two new electric models at its Tech Day. Foxconn also showed the production version of the Model C, which was presented as a concept last year.

First, about the two new prototypes: The recently announced Model B electric hatchback is fairly compact at 4.3 meters long (on par with a VW ID.3) and is said to have a range of 450 kilometres with a drag coefficient of 0.26.

Considering that the event was declared as a ‘Tech Day’, there is surprisingly little technical information about the vehicles themselves in the announcement. The Model B’s wheelbase of 2.80 meters is still mentioned (ID.3: 2.77 meters). The “streamlined roof and the innovative air curtain on the D-pillar” are said to contribute to the low air resistance, as they are supposed to reduce air turbulence considerably. There are no details yet on the battery, e-motor or charging power.

Foxconn also unveiled the Model V, the first electric pickup truck developed in Taiwan. It is said to offer a payload of up to one ton and a towing capacity of 3 tons. The body is a double cab with five seats. The contract manufacturer has not yet disclosed details of the powertrain.

At its Tech Day, Foxconn also showed the production version of the Model C, which was presented as a concept last year and is to be delivered to customers in Taiwan in the second half of 2023. The electric SUV with a cW value of 0.28 is expected to offer a range of just under 700 kilometres and accelerate from 0 to 100 km/h in 3.8 seconds. There was no further information on the Model E e-sedan, which will also be unveiled in 2021.

All three vehicles presented are based on the company’s MIH platform. To accelerate the development of further electric cars on this platform, Foxconn has also unveiled the EV software platform HHEV.OS. This operating system is said to be able to reliably map all functions and also be scalable. “Through the HHEV.OS software platform, EV designers can focus on the most valuable development work and achieve the purpose of rapid product launch. At the same time, Hon Hai will also apply to MIH to make HHEV.OS the standard for the MIH software open platform,” the statement says.

In addition, a solid-state battery and silicon carbide power modules were still unveiled. However, it is not known when these will enter production vehicles.