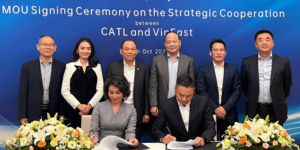 Chinese battery manufacturer CATL is developing a skateboard chassis that integrates battery packs, electric motors and other components. The CATL Integrated Intelligent Chassis (CIIC) is expected to be ready for series production shortly. A first potential customer has already been found with VinFast.

In a short announcement, CATL states that in the future it will supply the Vietnamese manufacturer with batteries, as well as with the complete substructure for its electric cars. Specifically, in a memorandum of understanding, CATL and VinFast have agreed to integrate the CIIC skateboard chassis into the cooperation in the future, in addition to the existing cooperation on CtP (cell-to-pack) battery supply.

This is the first time we have heard of such a chassis. CATL merely adds in its announcement that this includes “battery packs, electric motors and other components.” However, it does not mention any product development, launch plans, supplier parts or technical data.

Chinese portals report that in addition to the battery and motor, the flat chassis includes braking, steering and power electronics components. It is said to be adjustable in length, able to house the batteries in different locations and allow for a “removable body.” In addition, portals such as Sina.com and Thepaper.cn say that CATL began building a factory for the chassis project in February, and that the company reportedly filed a patent in early October that is “very similar to the skateboard chassis.”

These indications suggest that the letter of intent with VinFast is a near-term agreement. As to how long it will take CATL to start production of the chassis, we can only speculate. But the fact is that the world’s largest battery cell manufacturer is thus moving into the downstream value chain. So far, CATL had only presented the third generation of its cell-to-pack battery technology in this direction. Its production and market launch is planned for 2023. However, the CATL chassis represents a further step into the field of chassis, which has so far been tackled by automotive suppliers and OEMs.