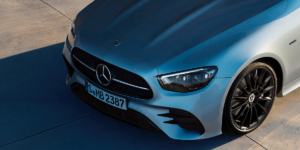 The new generation E-Class planned for 2023 will be the last new model from Mercedes-Benz on an internal combustion engine platform. All subsequent new model series in the future will be based on architectures that the Stuttgart-based company is developing specifically for electric vehicles.

This is what development boss Markus Schäfer told the German publication Automobilwoche. He is quoted as saying, “As things stand today, the E-Class with its derivatives is the last Mercedes-Benz model to be created on a pure combustion engine platform.” The current versions of the S-Class and C-Class, which are based on the same platform, will be phased out at the end of their model cycle. Mercedes-Benz’s goal is to put only battery-electric new vehicles on the road by 2030 – but that includes back-door options (“wherever market conditions permit”).

Mercedes had already announced in July 2021 that it would only introduce new electric platforms from 2025. Three architectures have been announced in concrete terms: MB.EA covers all mid-sized and large passenger cars and “will be the electric basis of the future BEV portfolio as a scalable modular system,” Daimler said at the time. For the performance models, the AMG.EA “electric platform designed for peak performance” is intended to address “the needs of Mercedes-AMG’s technology-savvy and performance-oriented customers.” Electric vans and light commercial vehicles are to be launched on the basis of the VAN.EA, which is also new.

Given the focus on BEV vehicles, Mercedes-Benz plans to reduce its range of internal combustion engines with the introduction of the Euro 7 emissions standard and – as Schäfer tells Automobilwoche – also end its engine cooperation with Renault for compact cars. Regarding the fuel cell, Schäfer says that there are considerable disadvantages in terms of unit costs, energy efficiency and the space required for the tanks. This technology makes sense for trucks on the long haul, but for passenger cars Mercedes is fully focused on the battery-electric future, he said.

Just yesterday, Mercedes-Benz announced plans for an approximately 4.70-meter counterpart to the C-Class as its first electric model in the ‘Entry Luxury’ segment. According to the British portal Autocar, the mid-size sedan will differ from the two current electric sedans EQS and EQE.