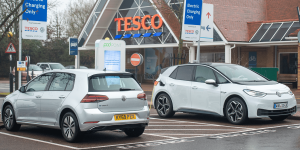 In the UK, as of 1 November,  Tesco will start charging electric vehicle drivers to use all types of charge points at its grocery stores. Cooperation partner Pod Point did not mention rising energy costs, saying only that the revenues will be used to meet charge point roll-out targets by next year.

At Tesco car parks, electric car drivers will now have to pay 28p/kWh for the slowest 7kW connections, rising to 40p for the 22kW AC and 50p for the 50kW rapid chargers.

In 2019, free charging for electric car drivers started at 100 Tesco stores across the United Kingdom so that both customers could top up their electric car batteries for free while shopping, while Pod Point customers also had access without using the stores. Volkswagen, Pod Point and Tesco collaborated on the rollout of charge points at Tesco stores. In 2018,  Volkswagen announced it had partnered with Tesco and Pod Point to install around 2,400 charging points for electric cars.

In 2020, the fast-charging station manufacturer Tritium was contracted to provide fast-charging stations for Pod Point to install at Tesco stores. While the 7 kW chargers could be used free of charge, there was always a requirement for payment with 22 kW AC and Tritium’s Veefil-RT 50 kW DC chargers. Now all charging will come at a price. The same year, VW and Tesco reported that they had installed 200 chargers that could be used free of charge at Tesco stores. According to FleetNews, this number expanded to 500 in March this year.

With the slowest charging points now also only available at a price, Pod Point did not mention the rising costs of energy in the UK as a reason for putting the new tariffs in place, only saying that the new fees would ensure drivers only use the chargers to top up while they are shopping to make the charge points available for others shopping at the store as soon as possible. That said, there will be no differentiation between the tariffs charged at Tesco store car parks to Pod Point customers in general and Tesco store customers. Charging payments can be made either via a Pod Point App or at online guest checkouts where available.

According to FleetNews, it was previously possible for electric car owners to travel around the UK and charge for free. According to charging provider Zap-Map, around 4,400 free charge points in Britain are located in retail parks, hotels and public car parks. Many of these are funded by retailers, landowners and some local authorities. Now, this number has been reduced by at least 500.