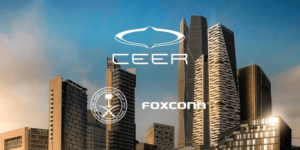 The structure of the joint venture is set up so that Ceer can profit from the experience of their partners Foxconn and BMW, while also maintaining independence in terms of decision-making. It also certainly doesn’t hurt to have explicit backing from the government of Saudi Arabia, as the Crown Prince is sitting in the position of chairman, while the Minister of Energy, for example, is also sitting on the board considering how the company and country can build a reliable charging grid. The ministers of industry and mineral resources, as well as sport, and education are also sitting on the board, making for a rather holistic campaign to bring one of the biggest oil-producing nations on the planet into the newest generation of mobility.

On the note of charging infrastructure, Ceer is considering several models, including taking a leaf out of Tesla’s Supercharger network strategy, which arguably covered one of the US’s biggest hurdles in EV adoption with range anxiety and charging opportunities.

The vehicles will be manufactured in Saudi Arabia and sold in the Middle East and North Africa (MENA) region from 2025. Components from BMW will also be licensed for Ceer’s electric vehicles. In identical press releases, the partners announce that they want to create an electric vehicle portfolio “that will lead the way in infotainment, connectivity and autonomous driving”. The duo did not elaborate on the planned vehicles and production capacities. The technical challenges particularly are present in the geography, as heat and dust are far more likely to affect the vehicle and batteries than the cold temperature fluctuations that North American and European customers tend to look at. With the production start set in 2025, the company has some time to consider how to best battle the weather conditions in the MENA region.

On the other hand, Saudi Arabia sets economic targets for the brand: Ceer is expected to attract more than 150 million US dollars in foreign direct investment and create up to 30,000 direct and indirect jobs. The US electric car manufacturer Lucid Motors is also building a factory in Saudi Arabia that will be designed for an annual capacity of 150,000 electric cars. The government of Saudi Arabia will buy up to 100,000 Lucid electric cars over a ten-year period, according to an agreement signed in April 2022.

The Saudi sovereign wealth fund PIF focuses on developing promising sectors that can help diversify Saudi Arabia’s economy. The Saudi Arabian government is very keen on the automotive sector: even before the current brand launch and the investment in Lucid Motors, the PIF was already known in the industry – for example, as an investor in Tesla (although there was a quasi-exit in 2020) and more recently in Aston Martin.

For Foxconn, the joint venture with the PIF is another mainstay. Foxconn Chairman Young Liu describes it as a pleasure to create a new automotive company focused on designing and manufacturing electric vehicles in and for Saudi Arabia. “We will leverage Foxconn’s technological expertise to support Ceer’s vision of creating a range of iconic electric vehicles that are built around the themes of connectivity, infotainment and autonomy. We want to make electric vehicles mainstream, and that is what Ceer is going to achieve in Saudi Arabia and the wider region.”

Polestar collects over $1.6 billion in funding

Electric Hummer is sold out for the next two years