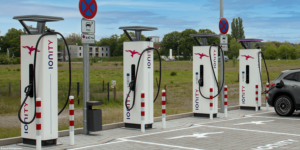 Five years after its founding, the fast-charging joint venture Ionity has delivered an interim status on the development of its HPC network in Europe. According to the report, more than 430 Ionity charging parks with 1,900 charging points are currently in operation in 24 European countries.

The shareholders first publicised the Ionity brand name exactly five years ago. The first locations with 350 kW chargers were still being built in 2017. Since then, according to the company, almost one million electric car drivers have charged their vehicles a total of around six million times at Ionity stations. In addition to the 430 existing charging parks, a further 56 are currently under construction. By 2025, the number of Ionity locations is expected to increase to more than 1,000 with 7,000 charging points.

These are impressive figures, but they also show that the expansion is proceeding more slowly than Ionity itself had planned. The fast-charging joint venture wanted to reach the mark of 400 charging parks by the end of 2020. However, the 400th charging park was only put into operation twelve months late at the turn of the year 2021/2022. And since then, only 30 more locations have been added in ten months.

For further classification: In the first phase from 2017 to the end of 2021, Ionity had built its charging stations primarily at existing service stations, in Germany as a partner of Tank & Rast. In the second phase, which is now underway, charging parks will no longer be built only on motorways, but also near major cities and along busy trunk roads. To this end, Ionity wants to buy more of its own land. And: New locations will be planned with an average of six to twelve charging stations right from the start. Previously, there were usually four to six.

“Electromobility is on the rise, and vehicle charging is increasing consistently,” Ionity wrote in its announcement. The network expansion ensures an attractive offer and helps to minimise waiting times, even at peak times. In addition to the construction of new parks, existing locations are also being upgraded with additional charging stations. In this way, the company wants to prepare its own network for the increasing demand.

“Ionity is growing steadily,” affirms CEO Michael Hajesch. “We are expanding the IONITY HPC charging network in all 24 countries where we are present.” In addition, his company is investing in new technologies, products and services at the stations. The number of employees also doubled during the Corona pandemic, he said. Ionity now employs 180 people – and the number is growing.

The joint venture was founded in 2017 by BMW, Daimler, Ford and the Volkswagen Group with Audi and Porsche. Hyundai Motor and BlackRock’s Global Renewable Power Platform later joined as financial investors. “Our founders from the automotive industry made the right decision back in 2017. We were the first to consistently bring high-power charging to the field and today we operate Europe’s largest fast-charging network for electric cars along motorways and major thoroughfares. We have delivered,” Hajesch sums up.

Audi to create an exclusive charging network in China