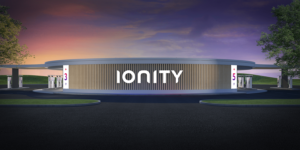 Ionity is receiving a 700-million-euro investment from its current shareholders and new partner Blackrocks Global Renewable Power Platform. The fresh captial will be used to massively expand the HPC network in Europe to around 1,000 locations by 2025.

At these 1,000 locations, the fast-charging joint venture then wants to operate around 7,000 charging points, which would roughly correspond to a fourfold increase. In the first phase, Ionity wanted to have set up 400 stations across Europe by the end of 2020. Currently, 385 charging parks with 1,526 charging points are in operation, and 37 new charging parks are under construction.

In this second phase, the concept will be different: In future, Ionity charging parks will no longer be located only on motorways, but also near major cities and along busy trunk roads. New locations will be planned from the outset with an average of six to twelve charging stations.

In the first phase, Ionity mainly installed charging columns at existing service stations, in Germany as a partner of Tank& Rast. With roofed fast-charging hubs, Ionity also aims to increasingly buy its own land to build charging parks or even their own service station on these locations, depending on where these are. The company has named the concept for such stations ‘Oasis’. “Our ‘Oasis’ concept shows what the charging experience of the future will look like,” says Ionity COO Marcus Groll. “Whether it is covered charging stations or charging parks alongside cafés, restaurants, and shops, we want to offer our customers a more convenient and comfortable charging experience in the future.”

In addition, existing locations along highly frequented routes with a great need for charging infrastructure will be upgraded with additional charging stations. In the first phase, the locations were mostly planned with 4 to 6 charging stations. In doing so, Ionity says it not only aims to improve the charging experience for customers but also to prepare its own network for the increasing demand for charging infrastructure.

Another development in the company’s plans is that power-sharing, meaning that several charging points share a connection and the charging power is divided up when fully occupied, will probably not exist at Ionity in this second phase either. This means that every charging point – provided it functions correctly – can deliver the maximum specified charging power at any time. For Ionity, this should mean 350 kW.

This second expansion phase is made possible by the aforementioned 700 million euro investment. How much of this will be contributed by the existing shareholders Audi, BMW, Ford, Hyundai-Kia, Mercedes-Benz and Porsche and what amount Blackrock will invest as the first investor outside the car industry is not clear from Ionity’s announcement. In October, there were reports that Blackrock was planning to invest 500 million euros.

“The entry of Blackrock as a future shareholder as well as the commitment of our current shareholders underline Ionity’s attractiveness for investors and impressively confirm the strength of our strategy,” says Ionity CEO Michael Hajesch. “The trust and investment of all shareholders will accelerate Ionity’s growth, the expansion of our high-power charging network across Europe and more broadly, the decarbonisation of the mobility sector.”

David Giordano, Global Head of Renewable Power at Blackrock, justifies the investment with the importance of charging infrastructure. “Electric vehicle charging infrastructure is vital to achieve a net-zero future. IONITY is one of Europe’s leading EV charging networks, bringing together auto industry pioneers to create a seamless experience for emission–free driving across Europe,” Giordano said.

Some of the carmakers have already announced confirmation of their investment but again, without specific sums. “We are transitioning our product range to electric cars in all of our core segments. This is a major change, but I see it as an even greater opportunity,” says Audi boss Markus Duesmann, for example. For the success of e-mobility, he says, nationwide charging infrastructure is absolutely crucial. “More than ever before, it isn’t just the product that matters, but the entire ecosystem. With its focus on advancing and improving the charging network offering, IONITY’s massive expansion will play a key role in making electric vehicles more attractive.”

Jason Jeong, President of Kia Europe, adds: “As we look towards the phasing out of new IC engine vehicles over the next ten years, it is essential that drivers have access to an expansive and reliable fast-charging infrastructure.”