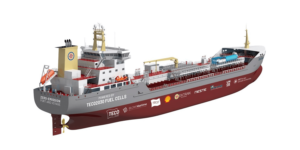 Teco 2030, Norway’s company specialising in fuel cell systems for ships, Shell and other partners want to retrofit a full-size tanker to run on hydrogen starting next year. The EU-funded HyEkoTank project is all about size and heavy loads.

The vessel destined for the hydrogen fuel cell retrofit is an existing tanker by Ektank made to carry 18,600 tons of cargo (DWT). The PEM fuel cell system Teco 2030 will install has a capacity of 2.4 megawatts and stores no less than 4,000 kilos of compressed hydrogen.

Looking at the numbers, Teco 2030 appears to be gearing up considerably on its promise to deliver a marine hydrogen solution that is more efficient, compact and durable than fuel cells based on modified vehicle stacks. Earlier news this September saw the company combine three of its 400 kW fuel cell modules into a system with 1.2 MW. However, the new system inside the HyEkoTank vessel would have double the power.

As for Shell, the oil and gas corporation will purchase the fuel cell system and provide the renewable hydrogen, said Carl Henrickson, General Manager of Technology, Innovation & Digitalisation at Shell Shipping and Maritime. Henrickson added customers would need the technology, a point underscored by Teco 2030’s press office.

“This pioneering project could become a first mover in this maritime shipping segment and contribute to achieving the ambitious climate targets set by the European Union,” so Teco. As part of the European Green Deal, the EU has committed to reducing GHG emissions by 55% by 2030 and a binding target of achieving climate neutrality by 2050.

This includes the shipping industry, and the EU plans to fund the project with five million euros under the Horizon scheme.

“The hydrogen tanker concept will be a state-of-the-art vessel retrofitted to reduce up to 100% of GHG emissions during the voyage and at berth,” said Tore Enger, Group CEO, TECO 2030, when welcoming the grant approval.

The partners expect to launch the HyEkoTank project in February 2023, with a demonstrator set to launch a year later.

Apart from Teco 2030 and Shell, other partners include Ektank AB, Blom Maritime AS, Umoe Advanced Composites AS (UAC), FKAB Marine Design, Neste Oyj, and UiT – The Arctic University of Norway.

While unlisted as a partner, Teco 2030 reportedly intends to work with Thyssen Krupp to set up production lines at the company’s fuel cell “gigafactory” for ships in Narvik, Norway. Fuel cell development is underway with the Austrian engineering firm AVL.

In addition to AVL, Teco 2030 has already entered into partnerships such as the Austrian electricity company Verbund, the Dutch inland shipping company Chemgas and the Dutch shipyard Thecla Bodewes. Teco 2030 has applied for support under the IPCEI hydrogen programme through the Norwegian state-owned company Enova to finance the factory.

Nine ships to get H2 systems with FPS & Holland Shipyards