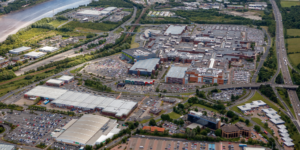 The charging network is ahead of the UK government’s target to have at least six ultra-rapid charge points at every motorway service area in England by the end of 2023. In ongoing installation work, Ionity and Extra MSA will continue upgrades by expanding Cobham Services (M25 J9/10) to provide 12 ultra-rapid chargers in Q1 of 2023, which will double the current number of charge points.

Ionity will also be installing six high-power chargers at Gateshead’s Metrocentre, one of Europe’s largest shopping and leisure destinations. The charging network provider points out that Gateshead Metrocentre, in Newcastle in the northeast of England, is one of Europe’s largest shopping and leisure destinations. Construction of the charging hub is to begin shortly and should be completed in Q1 of 2023. Ionity says: “the new ultra-rapid chargers will generate additional footfall and sales at the MetroCentre from a new customer base of EV drivers as well as help to future proof the facilities as EV ownership continues to rise.”

Ionity has had a partnership with UK green energy provider Octopus since 2021, which means all energy powering its ultra-rapid chargers is 100% renewable. Ionity is jointly owned by BMW Group, Ford Motor Company, Hyundai Motor Group, Mercedes Benz AG and Volkswagen Group with Audi and Porsche, along with BlackRock’s Global Renewable Power platform as a financial investor. Earlier this month, just five years after its founding, the fast-charging joint venture delivered an interim status on the development of its HPC network in Europe. According to the report, more than 430 Ionity charging parks with 1,900 charging points are currently in operation in 24 European countries.

Kempower to provide fast chargers for Neste in Finland