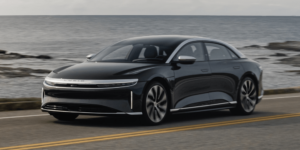 The US electric car manufacturer Lucid Motors achieved a turnover of $195.5 million in the third quarter of this year. That is about twice as much as in the second quarter. There is also news about the timetable for the Gravity electric SUV.

First to the business figures. The strong increase in sales compared to Q2 is mainly due to the previously reported delivery figures. Lucid delivered 1,398 vehicles from July to September, more than twice as many as in Q2. Lucid produced 2,282 units of its only Air model so far in the third quarter, a threefold increase.

With the Q3 performance, the company believes it is on track for its annual production forecast of 6,000 to 7,000 vehicles. However, this is a downwardly revised target, as Lucid was still assuming 12,000 to 14,000 vehicles by the summer. Nevertheless, this production target seems to be achievable and does not have to be revised again.

Lucid does not have to worry about demand at the moment: According to the averages, there are now over 34,000 reservations for the Air. This figure does not include the up to 100,000 vehicles under the agreement with the government of Saudi Arabia. Lucid calculates that the 34,000 pre-orders alone – assuming that binding orders are actually placed, delivered and paid for – represent potential sales of more than $3.2 billion.

“I’m delighted to say that we’ve made significant progress toward achieving our 2022 production target of 6,000-7,000 vehicles. We had record quarterly production of 2,282 vehicles, more than triple Q2, and deliveries of 1,398, which was more than double Q2,” says Peter Rawlinson, CEO and CTO of Lucid. “I’m also pleased to announce that we’ve now proven our ability to produce 300 cars a week, with a visible pathway to our next incremental ramp up.”

Production is expected to not only ramp up further but also become more complex over the coming year: The company plans to open pre-orders for its second model, the Gravity SUV, in early 2023. While there are no specifics on the production of the electric SUV yet, the Gravity is expected to catch up quickly with the Air e-sedan in terms of unit sales.

According to Lucid CFO Sherry House, the Gravity “will unlock a very large and incremental addressable market for us”. “We remain intently focused on scaling the business and continue to expect to see significant growth in revenue as delivery volumes ramp,” the finance chief said.

Along with its quarterly results, Lucid announced two new sources of cash: First, a deal for up to US$915 million in fresh capital from the Saudi government, which owns a majority of Lucid’s shares through its Public Investment Fund. There is also a new share offering programme: brokers are entitled to sell $600 million worth of new Lucid shares.