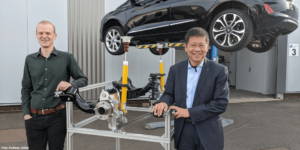 In Germany, as part of the “E-MLTA” research project in collaboration with Ford, VW and other partners, scientists at the University of Siegen have developed a new rear axle for battery-powered small cars. The objective is to enable more space in the body for a larger battery so that even small cars can achieve greater range.

One of the basic problems of many small electric cars is that with the typical dimensions of the class, there is little space between the axles for a sufficiently large drive battery. As a result, many small electric cars with their manageable range (and the lower charging power due to the small battery) are significantly less flexible on longer journeys than combustion models of the same size.

With the new rear axle developed as part of the “E-MLTA” research project (development and testing of a space-saving multi-link torsion axle), it should now be possible to install larger drive batteries that increase the range of the cars by 35 per cent, according to the German university. When measured against current small electric cars, the new rear axle should allow the range should increase by up to 115 kilometres.

Professor Xiangfan Fang’s team has a very straightforward idea. “We have ‘flipped’ the rear axle and thus moved the cross member of the axle to the rear, towards the boot,” says Fang. “This increases towards the front the area available under the car for the battery.” In practice, of course, it is a bit more complicated, because in order to maintain the car’s usual driving characteristics of the car, the vehicle builders from Siegen had to make further adjustments to the axle: Among other things, several links and joints ensure that the car behaves normally when braking and does not go up with the rear end.

The new steel axle was first designed on the computer and virtually integrated into the car body to simulate its properties. Based on this data, the prototype of the steel axle was then created and installed in a non-electric Ford Fiesta in collaboration with the industrial partners. To simulate the weight of the battery, heavy metal plates were placed under the floor of the petrol-fuelled car. The car was then equipped with extensive measurement technology and extensively tested by experts on the test bench and on a Ford test track in Belgium. There, and during further test drives in Olpe, it was shown that the comfort and safety of the vehicle were maintained. In some points, there were slight deductions in some points but only in terms of driving dynamics. “But the difference is so small that we can certainly compensate for it through further tuning,” says Professor Fang.

Work is currently underway to improve the new axle concept even further. At the same time, talks are underway with several car manufacturers with the aim of fitting the rear axle in small electric cars as standard. According to the professor, representatives of the two project partners Ford and VW have been impressed by the results overall, and both companies are “very interested” in the new rear axle.

In the short term, the development will not make it into series production, but the people from Siegen are optimistic. “We would be very proud if, in a few years’ time, e-cars were driving around with our axle,” says Fang.

In addition to VW and Ford, the companies Mubea, Vorwerk Autotec, Schmedthenke Werkzeugbau and CP Autosport GmbH were also involved in the “E-MLTA” project. Another project partner was the Technical University of Cologne. The team from the Chair of Lightweight Vehicle Construction at the University of Siegen (FLB) included Xiangfan Fang and Jens Olschewski, as well as Timo Schlichting and Tobias Nießing. Of the 1.6 million euros in funding from the European Regional Development Fund (ERDF) NRW, 530,000 euros went to the University of Siegen.