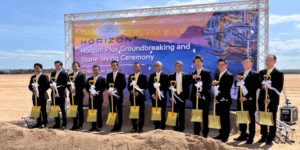 The joint venture, founded last year, is called Horizon Plus and is to build the approximately one billion US dollar production facility in the Rojana Nhongyai Industrial Park in Chonburi Province. The site is part of Thailand’s so-called Eastern Economic Corridor (EEC), a special economic zone of three provinces in eastern Thailand. As communicated in advance, commissioning is planned for 2024 with an annual capacity of 50,000 electric vehicles. Afterwards, the capacity is to be successively tripled to 150,000 vehicles annually.

Interestingly, there are many parallels with BYD. The Chinese manufacturer is also planning an electric car plant in Thailand with an annual capacity of 150,000 electric cars. This, too, is to be built in Thailand’s Eastern Economic Corridor and go into operation in 2024.

But back to Horizon Plus: according to an accompanying statement, the company will invest around 37,000 million THB (just under 1 billion euros) in the plant. The electric vehicles produced there are primarily intended for the Southeast Asian market.

The establishment of the joint venture between Foxconn and PTT had already been announced several times in advance. Since the beginning of June 2021, the two partners have already been developing a joint electric car platform that includes hardware and software services. Foxconn has big plans itself and wants to be represented in every tenth electric car worldwide with components or services by 2027 at the latest. To this end, the contract manufacturer presented its own electric car platform called MIH in October 2020. According to the announcement at the time, this is to become the “Android system of the EV industry”.

The open platform announced for Thailand is to be made available to all carmakers who want to produce in Thailand for domestic or foreign markets, in line with the “Contract Design and Manufacturing Service” business model promoted by Foxconn. The carmakers are to be able to access “the entire value chain of services” of the joint venture. Foxconn is pursuing a similar approach in the USA with Lordstown Motors.