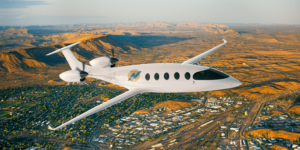 The Australian scheduled and charter airline Northern Territory Air Services (NTAS) has signed a letter of intent with Eviation Aircraft for the purchase of 20 electric aircraft. The aircraft in question is the nine-seat Alice model.

The Alice made its maiden flight in September. Alice is an electric aircraft for nine passengers and two crew members, powered by two magni650 electric propulsion units, each rated at 640 kW, from magniX. The promise: The operating costs per flight hour are to be a “fraction” compared to light jets or high-end turboprop aircraft, which is why (in theory) even less frequented routes can be served economically.

Eviation does not specify in the announcement under which conditions the now-signed letter of intent can become a binding order. Instead, it emphasises how the advantages of Alice complement the business model of NTAS. NTAS is based in Alice Springs and provides service to major airports in the Northern Territory, such as Alice Springs, Uluru and Mount Isa.

Recently, Eviation Aircraft had already received a letter of intent from Germany for 25 fully electric feeder aircraft: Evia Aero, which is developing a sustainable regional airline, also reportedly wants to use the Alice electric aircraft. DHL Express had also ordered twelve Alice aircraft from Eviation – but the cargo version.