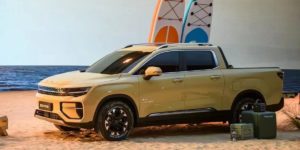 Branded as a label for lifestyle vehicles at launch, Geely subsidiary Radar Auto just debuted its first model in China. The RD6 electric pick-up truck hits the market in four versions at prices starting from 178,800 yuan, below 25,000 euros.

Geely launched Radar Auto only in July and announced the RD6 at the time. Looking at the time frame, the new model had to rely on proven technology, and, indeed, it utilises the Group’s SEA platform. Still, there has been new data now recorded by CN EV Post, which attended the launch in China.

Other data the portal picked up includes a permanent magnet synchronous motor of up to 200 kW power and accelerates from 0 to 100 km/h in 6.9 seconds. Autonomous systems include L2 driving assistance, including Rear Collision Warning, Rear Cross Traffic Alert, and Autonomous Emergency Braking.

So far, only Chinese consumers can pre-order the model through the Radar website and app.

However, Geely announced the ‘Smart Geely 2025’ strategy last October and is geared towards expansion with targets including total sales of 3.65 million electric vehicles by 2025, an average of 10,000 EVs per day.

Within Geely, Radar Auto is an independent brand, reportedly with its own R&D facility in Hangzhou, Zhejiang, and an EV production facility in Zibo, Shandong. At the same time, the brand uses Geely’s Sustainable Experience Architecture (SEA), as mentioned above, which the Group has rolled out across a whole range of brands since unveiling it in 2020. Lynk & Co. and Zeekr are to use SEA, Volvo Cars and Smart, and the Chinese tech group Baidu have been known to build on it.

As for setting Radar apart, automotive designer Peter Horbury helped with the branding from his design studio in the UK. “The Radar product portfolio is focused on electric pick-up trucks and SUVs; this direction challenges us to mix functionality and usability with aesthetic form,” he explained when Radar first appeared in July.

There has been no indication that Geely would launch the Radar RD6 in markets outside China.

Mercedes has lowered prices for the EQE and EQS in China