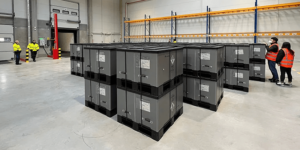 In Teplice, the new battery storage facility from Maersk is located in the north of the Czech Republic, close to several automotive manufacturers and suppliers. As Teplice is only a short distance from the German-Czech border, the VW plants in Zwickau and Dresden, for example, are easily accessible, as is the Skoda parent plant in Mlada Boleslav. The distance to the Hyundai plant in Nosovice near Ostrava is considerably greater.

In addition to the car plants in the Czech Republic and eastern Germany, plants in southern Germany are also targeted. Here, for example, the Audi plant in Ingolstadt or the Bavarian BMW plants could come into question – although BMW has already established its battery logistics with the production steps at the individual locations and will probably not run them via the Czech Republic.

Maersk says that batteries can be delivered by rail from Hamburg, Bremerhaven, Rotterdam, Koper or Rijeka. Thanks to good connections to the Czech and German motorway networks, the batteries should be able to be distributed from Teplice to the surrounding car production sites “within a few hours”.

Compared to ordinary warehouses, the Maersk storage facility will include a monitoring system for the battery warehouse with thermal imaging cameras and shelf sprinklers throughout the warehouse. The space is divided into four independent, fire-resistant compartments.

In addition to temporary storage for onward transport, Maersk also offers repacking, in-depth quality checks and battery charging as an additional service. “We are an experienced and trusted partner in transportation and logistics for automotive customers. Our processes are widely audited and approved by car makers and OEMs,” says Lea Offut, Managing Director of Maersk Central South Europe. “We are thrilled that we are taking the next step now with this special warehouse, offering dedicated services for electric car batteries right in the heart of the Czech and German car maker clusters.”