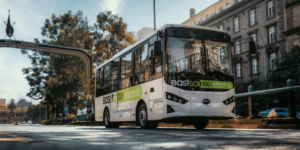 “BasiGo is thrilled to have the backing of investors who are leaders in the automotive sector and climate finance,” said Jit Bhattacharya, CEO of BasiGo. “Over 90% of Kenya’s electricity already comes from renewables. Yet Kenya’s transport sector relies entirely on imported petroleum fuels,” he said. “By electrifying Kenya’s public transport, we can make an immediate dent in climate emissions, clean up the air in our cities, and give bus owners relief from the rising cost of diesel.”

To do so, the company operates a Pay-As-You-Drive financing model in partnership with KCB Bank and Family Bank to provide up to 90% financing to transport companies to purchase an electric bus. BasiGo says this model brings electric bus costs almost on par with the upfront cost of a diesel bus. Operators can then subscribe to BasiGo and the company a KES 20 ($0.17) per kilometre fee, which includes leasing the battery, charging at BasiGo charge stations, and service and maintenance provided by BasiGo.

The company also already has customers and is currently building the next 15 electric buses, using parts from China’s EV maker BYD. The new buses shall head for Nairobi next January, and BasiGo is already deploying DC fast-charging stations at strategic locations across the Kenyan capital. Citi Hoppa and East Shuttle are among its clients there, and BasiGo says it has another hundred reservations.

There is potential. Kenya’s public transport sector is home to over 100,000 privately-owned buses and minibuses, often referred to as matatus. However, with recent increases in Kenya’s fuel prices, Nairobi bus operators are paying an estimated KES 30-50 ($0.25-$42) per kilometre for diesel fuel alone.

“We strongly believe in the potential of electric buses in Africa,” said Takeshi Watanabe, CEO of Mobility54, commenting on the funding decision. “We are extremely excited to build a solid partnership with BasiGo, and to support their growth by fully leveraging the business assets under Toyota Tsusho and CFAO.”

According to the website, BasiGo is primarily deploying BYD’s existing e-bus model, K6 featuring 250 Km of range and a recharge time of around four hours.

The company reports that all buses delivered in 2023 will be locally assembled in Kenya and aims to have over 1,000 electric buses deployed in the country by the end of 2025.