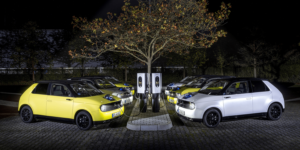 Honda has received certification for a fleet of mass-produced electric vehicles for primary control reserve (PRL) prequalification by transmission system operator Amprion as part of a pilot project with Next Kraftwerke. Honda calls it a “significant breakthrough in V2G technology.”

Honda used series Honda e vehicles in the pilot project, which provided PRL services for the transmission system operator and thus qualified for grid stability support. On the part of the car manufacturer, Honda R&D Europe GmbH supervised the Vehicle-to-Grid project. The partner Next Kraftwerke is one of the largest operators of virtual power plants in Europe.

Technically, the process is quite complex due to the communication and variables involved: the Honda power management system uses real-time information on the current power capacity from Next Kraftwerke and, according to the Japanese car manufacturer, can respond to the charging and discharging requests of the transmission system operator (in this case Amprion) for each individual vehicle within the required standard time, taking into account the individual preferences of the respective electric car drivers regarding the charging status.

In the event of short-term frequency deviations in the electricity grid, operators use balancing services that automatically compensate for imbalances between supply and demand. Of these balancing services, PRL is the highest performance class for grid stabilisation. It is also called the primary control reserve because it is the first response to frequency disturbances, while there is also a so-called secondary control reserve (SRL).

Honda sees the development and project as an important step towards strengthening the role of e-vehicles and bidirectional charging technology in a future sustainable energy system. In addition to the further expansion of renewable energies, maintaining consistent grid stability will become one of the greatest challenges for transmission system operators.

In September just passed, Next Kraftwerke, LG Electronics and Hyundai already connected eight Ioniq 5s to form a virtual power plant to provide secondary regulating power (SRL) for Amprion, for which the vehicles achieved prequalification. These eight Hyundais were not the first cars to feed electricity into Amprion’s grid in Germany since a V2G pilot project was conducted in Hagen in 2018 with the Nissan Leaf.

But it’s not the first V2G deployment of the Honda e for Honda, either. For the Swiss V2X Suisse project, the carmaker has brought in 50 Honda e and 35 Honda Power Managers so that the vehicles can be used by car-sharing provider Mobility at various locations in Switzerland and charged bidirectionally. V2X Suisse runs until the end of 2023.

ABB e-mobility closes funding round with over €200 million