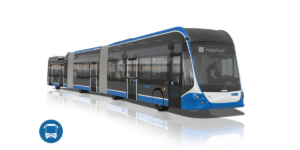 In the following years, VBZ aims to deploy another 140 vehicles, namely 85 lighTram 19 DC and 55 lighTram 25 DC. In this case, “DC” does not represent direct current but “Dynamic Charging”. This is how Hess describes its technology for charging vehicles via overhead lines. This differs from the company’s other “flash charging” system TOSA it developed together with ABB. An example of such a system is on order in Brisbane, Australia, as reported.

Hess has also received several other orders this year from France, Austria, and Switzerland. Since the demand exceeds the existing capacities at Hess, the company from the canton of Solothurn plans to install a new plant in Portugal this December. The cabins for the latest orders will be built in Porto, while final assembly will continue at the main plant in Bellach, Switzerland. The new plant in Porto will replace the current second production facility in Minsk, Belarus, where production was stopped in the spring of 2022 due to the Russian war in Ukraine.