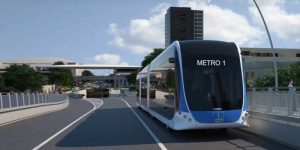 The Australian city of Brisbane wants to procure 60 electric buses. The vehicles will be built by the manufacturers Hess from Switzerland and Volgren from Australia and will be quickly charged with Hitachi/ABB flash charging technology.

++ There has been an update to this article; please continue reading below. ++

The articulated e-buses in tram design will accommodate 150 and 180 passengers. The vehicles feature two joints and thus three vehicle parts, adding up to a length of 24.4 meters. Passengers can board and disembark via four large doors and will also benefit on board from a free WLAN and USB port for charging their mobile devices.

The Swiss manufacturer Carrosserie Hess specialises in long articulated buses. Versions with battery-electric drive are used in Nantes, among other places, and only a few weeks ago, St.Gallen ordered 17 units of the catenary version.

In the press release, the city administration has not specified costs. Australian media reported 190 million Australian dollars, the equivalent of 117 million euros. Criticism was levelled at Brisbane’s mayor Adrian Schrinner since the order volume is more than twice as high as planned. According to Schrinner, however, the originally estimated 94 million dollars were for a diesel fleet. Now the electric technology is available, and the acquisition costs will be compensated in the long run by lower maintenance and operating costs, apart from the obvious advantages of reduced noise and zero air pollution.

The higher sum already includes the costs for the charging infrastructure. ABB’s fast chargers are to be used here, which charge the batteries with their flash charging in just six minutes at the terminal stops. The vehicle designers emphasise that they imposed high standard requirements in all technology monitoring the buses and the charging infrastructure that feeds back to the central control centre. Also, the information feeding back to the central control centre is data to monitor speed, passenger capacity and frequency of operation. This allows for exceptionally detailed analysis in a quick overview for maintaining and extending the quality and efficiency of services.

The first of these vehicles will be built for testing in 2020, and regularly scheduled service in Brisbane with all 60 electric buses is expected to start at the end of 2023 – provided the prototype is convincing in the test phase.

The buses are of type HESS lighTram 25, and the order follows the above announcement and subsequent pilot runs to test acceptance and road readiness.

HESS’ CEO, Alex Naef, said, “Brisbane City Council, HESS, and key stakeholders spent considerable time developing what is set to become one of the most accessible public transport options in Australia.” He explained the vehicles had been “uniquely co-designed with three large and easily accessible mobility aid bays, an automatic electric ramp, hearing loops and the ability to communicate with the driver via vehicle help points” to ensure increased accessibility.

Brisbane now expects to see the first Hess electric buses arrive down under in late 2023.

ABB majority stakeholder ABB will reportedly deliver Australia’s “first-ever flash charging system” with manufacturing for charging infrastructure well underway, so Hess. The system fully charges a metro in under six minutes. While this is “exceptionally fast,” as the company beholds, they were “mindful that we also needed to keep the batteries light and the vehicles in frequent operation.”

Hess expects to deliver the end-of-route charging facilities and the metro depot in partnership with Hitachi Energy in time to introduce the bendy bus fleet in Brisbane.