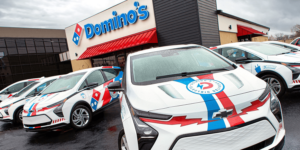 The US pizza chain Domino’s has ordered 800 Chevrolet Bolt electric cars from General Motors. The first 100 electric cars will arrive at selected branches in the USA this month.

The other 700 Bolt electric cars will follow in the upcoming months, according to the pizza chain. Domino  has published a photo showing several Bolts in the company’s white-blue-red livery. The pizza chain claims that this is the largest electric pizza delivery fleet in the USA.

On a special map on the Domino’s website, customers are supposed to be able to see how many electric vehicles are already in the fleet in their state and how many there are to be in the future.

The company says it delivered its first pizza in 1960 with a VW Beetle. Domino’s hopes the switch to electric cars will bring a number of benefits over fossil fuelled versions, such as lower maintenance costs along with the more obvious aspect of cleaner air and less climate-changing emissions. In addition, the company points out tht electric cars would also provide more opportunities to attract delivery drivers who do not have their own cars.

“Domino’s has always been a pioneer in pizza delivery, and electric delivery vehicles make sense as vehicle technology continues to evolve,” said CEO Russell Weiner. “We’ve committed to zero carbon emissions by 2050, and this is one way we’re reducing our environmental impact – one delivery at a time.”

Indeed, Domino’s has surfaced a number of times in our reports on electric vehicles. In 2016, Domino’s began using delivery robots, in 2017, the company tried out deliveries with Ford Fusion Hybrid equipped with self-driving technology in Michigan, and drones to make deliveries in New Zealand. The next year, Domino’s began delivering pizzas in France with electric moped scooters, phasing their delivery fleet to electrical vehicles, and, at the time, had already converted 18% of their locations to fully electric transport. Back home in the United States, in 2019, the pizza maker began using e-bikes for deliveries when Domino’s began delivering their pizzas in partnership with Rad Power Bikes across company-owned stores throughout Miami, Salt Lake City, Baltimore and Houston.