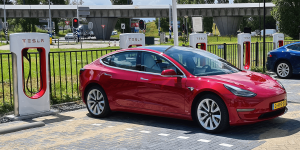 According to user reports, Tesla has significantly reduced the tariffs at its Superchargers in Germany and other European countries. The new tariffs are said to be around 15 cents per kilowatt hour lower than the previous price.

As the German publication Teslamag reports, citing the user reports, the German average is now apparently 55 cents per kilowatt hour at peak times and 50 cents at all other times. After introducing flexible tariffs at almost all Superchargers in Europe last week, Tesla still gave the average tariff in Germany as 73 cents during peak hours and 65 cents per kWh for the rest of the day.

Although this may be the case, different prices per location will still apply. Teslamag gives two examples; the first of which are the Superchargers in Böblingen in the German state of Baden-Württemberg, where the prices are 55 and 61 cents at peak times, while in the German town of Soltau the tariff is 52 cents and only 47 cents during off-peak hours.

The prices for charging third-party brands at the open locations have also dropped. As a random check by our German colleagues at electrive.net revealed that in Böblingen, 66 to 73 cents per kilowatt hour are charged for charging a non-Tesla, while in Kaltenkirchen it is 64 to 71 cents/kWh. The rates for non-Teslas used to be as high as 82 cents/kWh.

It is important for Tesla in the German market that it stays competitive with the EnBW price level, which  due to the high prevalence of EnBW fast chargers and the “mobility+” charging card (or via various cooperations such as ADAC eCharge). Over the last few months, many German Tesla drivers had switched to other charging stations due to the higher prices.

If the average prices are used as a basis, this would mean a price reduction of around 23 per cent in the basic tariff and almost 25 per cent in the peak periods. Since 2021, prices had risen in several large and small steps – in August 2021, they were still charging 37 cents/kWh. With the current price reduction, the tariffs are now even slightly below the level before the last price increase in September, when they were between 56 and 58 cents per kWh in Germany, but without the division into peak and off-peak times.

Tesla is not the first provider to lower its prices again after numerous increases: At the beginning of November, Fastned had adjusted its prices downwards in several countries, albeit at a higher level: A kilowatt hour still costs 74 cents with the Dutch fast-charging provider.