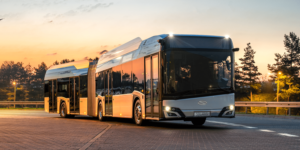 Poland’s fourth largest city, Lodz, has ordered eight electric buses from Solaris, including the necessary charging infrastructure. The eight Urbino 18 Electric articulated buses will hit the city’s streets in the second half of 2023.

Although they will be the first all-electric buses from Solaris in Lodz, this is not the city’s first investment in Solaris vehicles with alternative drive systems. Solaris has already delivered 29 low-emission Urbino 12 mild hybrid buses to the city, which should be followed by another 20 units of the same type.

The vehicles for Lodz will be equipped with a battery of over 400 kWh. Theoretically, larger batteries would also be possible, but these are not necessary for use in Lodz. This is because the operator there has decided to recharge the batteries on the road in addition to charging in the depot. For this purpose, the 8 articulated buses are equipped with current pick-up rails on the vehicle roof for an inverted pantograph. In this process, the current-carrying charging mast is lowered from the station at the (final) stop onto the rails on the vehicle roof. Solaris says: “Thanks to the appropriate configuration of batteries and charging infrastructure, the Urbino electric buses in question will be able to operate up to 24 hours a day.”

The eSConnect remote diagnostics system developed by Solaris is used to operate the buses. With the data thus collected and evaluated on the battery charge status, the calculated range and the current and total energy consumption, the transport company should be able to optimise the use of the buses. Downtimes and unnecessary trips back to the depot should thus be avoided.

When the new generation of buses was presented last month, the Polish electric bus maker revealed that the Urbino 18.75 electric bus is one of 183 similar units ordered by public transport operator Unibuss AS from Oslo in Norway. For Solaris, this is the largest single order to date.

In Lodz, Poland, the Urbino 18.75 Electric buses will be put into operation in the second half of 2023.