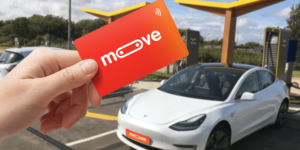 The African fintech company Moove has launched Moove Charge in London. The service made for Uber drivers relies on technology by Paua, a roaming provider specialising in UK fleets. Moove Charge is to provide access to 6,600 charge points across the British capital.

Here is a brief introduction for those new to Moove and Paua since both companies are less than a year or two old. Moove first made our news when it signed up as an Uber partner in London this September. The company targets putting up to 10,000 electric cars on London roads by providing financing to Uber drivers. Today’s announcement did not deliver an update on this goal. As for Paua, the company reportedly launched a roaming network in April of this year by managing to sign up networks such as Osprey, Fastned, Ionity, Connected Kerb, Char.gy, and Mer.

While not explicitly said in today’s statement, it is likely that Moove Charge essentially accesses the Paua roaming network, however, on a custom app. Moove says the app allows users to locate charge points compatible with their vehicle, show availability in real-time, filter stations by charge speed, and there is a wallet function for paying.

The company also claims Moove Charge could save drivers up to £340 per year, or approx. 12% of the average annual EV charging cost but does not explain how since there are no details on tariffs.

When Paua launched this year, the company offered a ‘Standard’ subscription starting at £3 per driver per month. The ‘Occasional’ tariff was free but incurs a 20% service charge on transactions. The offers then also included three months free of charge. However, Paua does not offer standard charging rates since pricing remains at the discretion of the CPOs, especially when it comes to DC charging, so the fees are for services such as billing and access only.

London reportedly has a fast-growing network of EV charge points, only these are operated “by a fragmented market of charge point operators (CPOs) and suppliers,” as Paua points out. The company counted over 25 separate CPOs in London, each with its own app “making access to charge points cumbersome”. The startup says it designed the Moove Charge App “specifically with these pain points in mind” and to provide “easy location and ease of access” to the many charge points in London.

Uber drivers can check current options to go electric in the ‘EV Hub’ available in the driver’s app.