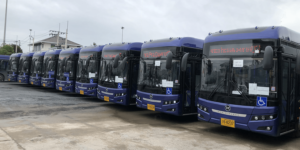 In the Thai capital of Bangkok, 1,250 electric buses are currently set to replace old diesel buses. Within three years, the number of electric buses in the Bangkok metropolitan area is to be increased to 8,000.

According to several news reports with reference to the Thai Ministry of Transport and the Bangkok Mass Transit Authority (BMTA), bus routes in the mega city of Bangkok are increasingly being completely electrified – most recently, route 515, which is operated by Thai Smile Bus (TSB) along with several other electric routes in the capital. TSB recently expanded its business by merging 21 bus and boat operators, which resulted in the TSB network now operating services on some 120 bus routes and three water routes.

Transport Minister Saksayam Chidchob attended the opening of electric bus services on route 515, connecting Salaya and Victory Monument. He said: “These electric buses will be deployed on routes across Greater Bangkok and connect with other public transports to meet passengers’ needs, improve quality of life, solve traffic issues and reduce PM2.5 pollution.”

According to the Transport Minister, the government will aim to increase the number of electric buses in Greater Bangkok to 8,000 within three years. The Bangkok Mass Transit Authority (BMTA) and the state-owned Transport Co. alone have defined the goal of replacing all diesel buses with electric buses within three years. There are currently said to be 2,885 buses on 107 routes under BMTA responsibility.

The city of Bangkok covers around 1,500 square kilometres in the Chao Phraya River delta in central Thailand. The city has an estimated population of 10,539 million as of 2020, which accounts for 15.3 per cent of the country’s population.

So far, no information has been revealed in English on the buses apart from the fact that they come equipped with wheelchair access and feature GPS, an electronic ticketing system and security cameras. Considering the level of automotive manufacturing in Thailand, the electric buses now replacing diesel buses are likely to be from domestic production. The press photos in different media show Next Minibus models.

According to the Bangkok Post last year, the electric bus manufacturer Nex Point Plc which makes the Next Minibus models moved from red to black on its balance sheet in 2021 due to growing electric bus sales after years of losses. Chief executive of the Thai automotive company, Khanist Srivajiraprabha said last year that the number of registered buses on Thai roads in 2021 stood at 151,550 in total and that up to 40,000 of these are set to be changed to electric buses within a decade. The company’s manufacturing plant in Chachoengsao has a production capacity of 6,000 units per year.

As elective reports show, the automotive industry in Thailand is the largest in Southeast Asia and the 10th largest in the world. According to Wikipedia, the Thai automotive industry has an annual output of more than two million vehicles. This is greater than the number of vehicles made in countries such as Belgium, Canada, the United Kingdom, Italy, Czech Republic and Turkey.

London to be fully covered by the ULEZ