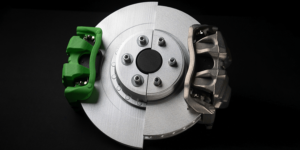 Continental continues to develop brake calipers for electric vehicles. The so-called ‘Green Caliper’, newly developed brake calipers for disc brakes, are significantly lighter than previous designs and have a lower residual drag torque. In two to three years, the system could make its way to use in production cars.

In combination with the brake disc, the lower mass and reduced friction between the brake pad and the disc makes it possible to increase the range of electric vehicles by around one per cent, according to Continental. The new brake caliper alone is said to be up to two kilograms lighter; in the system, up to five kilograms of weight are to be saved per brake in individual cases, according to the supplier.

The special electric car brake was apparently developed purely with a view to increasing market share. Recently, brakes for electric cars have also become an issue because of the EU proposal for the Euro 7 standard, which, as is well known, also sets specifications for maximum brake abrasion. However, Continental does not mention the Euro 7 standard and brake abrasion in the press release – but focuses purely on weight and efficiency.

The cast-iron fist caliper of the Green Caliper is much more compact, the brake pads are smaller and less thick because they wear out more slowly. This reduces the mass of the caliper. At the same time, the smaller caliper with its lower bridge height allows the installation of a larger but thinner cast-iron brake disc.

The weight saving in the course of the redesign was made possible by the consistent design to meet the requirements of electric cars. Because of the usually higher total weight due to the battery, the deceleration performance of an electric car brake often has to be even higher, as Continental states. Since the disc brake is activated much less frequently due to deceleration by recuperation, the overall thermal load on the brake is lower. The new brake caliper design was optimised for this requirement profile – more peak power, less thermal load.

As a result, the larger brake disc can be made “significantly thinner” due to the lower thermal load, which saves weight – Continental does not give a figure here. Since the brake engages further out on the larger disc and thus achieves a high deceleration performance with the same clamping force due to the longer lever arm, the braking performance is optimal at the same time. The smaller fist caliper described above and the thinner brake pads are also lighter.

In addition, efficiency has been increased in that an “active return of the brake pads after each braking action” reduces the residual grinding torque between the pads and the disc to less than 0.2 Newton metres, Continental refers to this as “virtually loss-free operation”. A certain amount of residual drag is actually necessary for a good pedal feel, but it increases consumption. If the “Green Caliper” brake is combined with the MK C2 brake-by-wire brake system and an electronic pedal, a good pedal feel should be achieved even without residual drag.

“Increasing efficiency is a primary goal in the optimization of electric vehicles. The lower the loss of electrical energy, the greater the range of the vehicle,” says Dominik Hiss, Head of Product Center Friction Brakes, Hydraulic Brake Systems at Continental. “Brakes can make a contribution to this that has not been exploited to date. With the new Green Caliper, we are providing a production-ready technology that unlocks additional potential for the range of an electric car.”

According to Continental, the Green Caliper brake calipers are so far developed that they can be integrated into vehicles with the usual lead time for application development of two to three years.

Tesla to deliver updated Model 3 in 2023