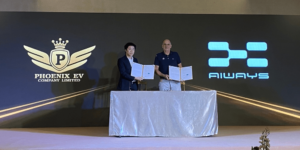 Chinese electric car manufacturer Aiways has become a strategic partner with Thai eMobility service provider Phoenix EV. The deal includes an order for at least 100,000 Aiways vehicles over the next five years and the establishment of a joint venture.

The collaboration between the two companies will focus on the Thai market, according to an accompanying statement. Phoenix EV is an “experienced service provider in the new energy vehicles segment” and thanks to Aiways, can now “significantly expand its product portfolio in and around Thailand”. In addition to the planned order of 100,000 Aiways vehicles over the next five years, the partners have agreed on an option for 50,000 more units.

Both sides are also planning to set up a joint venture called Aiways Thailand, which will manage other joint ventures as an umbrella company. It is envisaged that Aiways Thailand will take over the sales and service of the vehicles but also create its own charging and battery exchange infrastructure. Another activity planned by the duo is “local development for special market requirements”. These are to be handled directly on-site via Aiways Thailand.

“The cooperation with Phoenix EV represents a significant step for the Aiways brand,” said Dr Alexander Klose, Executive Vice President Overseas Operations at Aiways, adding: “With its initial volume of 100,000 units, plus the option of 50,000 more, the order is a real milestone and the foundation for our Southeast Asia strategy.” The Chinese manufacturer already has operations in Singapore and Laos. With Phoenix EV in Thailand, Aiways now claims to be in the best possible position in Southeast Asia in all growth markets.

In parallel, Aiways is pushing ahead with its expansion into Europe. In Germany, for example, the Aiways U5 has been available for order since 2020 and the Aiways U6 since recently.