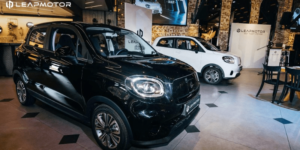 Leapmotor now offers its electric cars outside the Chinese market. The company has opened its first three showrooms in Israel, in Tel Aviv, Haifa and Ramat Gan. Leapmotor wants to further expand its overseas markets from Israel, so it could also become active in Europe in the future.

In Israel, the manufacturer has so far only offered its T03 electric car. According to Chinese reports, at least the store in Tel Aviv will offer same-day delivery if customers place an order locally.

It is yet clear how many T03 electric cars Lepamotor has in stock there and how many variants there are. A published photo shows 46 vehicles in four different paint schemes.

Further export to other markets is possible: according to the company, the T03 has already received type approval in Europe. In China, the model is available from 79,500 yuan, or 10,700 euros after promotion. Israeli prices have not yet been revealed.

Leapmotor reportedly plans eight new electric models by 2025 and presented its first production model with cell-to-chassis technology in May 2022 with the C01 electric sedan.

Premiere of the Opel Astra Electric: The range is complete